What does Alonzo mean?

[ 3 syll. a-lon-zo, al-o-nzo ] The baby boy name Alonzo is pronounced ahLAANZow- †. Alonzo has its origins in the Gothic language, and it is used largely in Italian, Spanish, and English.

In addition, Alonzo is a variation (Italian and Spanish) of Alfonso (English, Italian, and Spanish).

The origin and meaning of Alonzo is inherited by all variant forms.

Alonzo is an all-time favorite. Today it is still fairly popular as a baby name for boys, though not to the extent it was before. In 1900, 0.071% of baby boys were named Alonzo. It ranked at #182 then. The baby name has since experienced a drop in popularity, and in recent times it is of occasional use. In 2018, it ranked at #472 with a usage of 0.032%, but it was nevertheless the most popular out of all boy names in its group. Alonzo was twice as popular as the next ranked name, Alonso, in 2018. 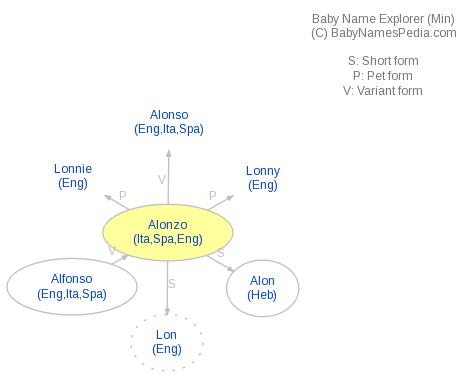