What does Aloysius mean?

[ 4 syll. a-loy-siu(s), al-oysi-us ] The baby boy name Aloysius is pronounced as aeL-ah-WIH-SH-ahS in English or aa-Low-IY-Siy-ahS in Dutch †. Aloysius is largely used in the Dutch, English, French, German, and Scandinavian languages, and its origin is Old French and Germanic. Old French origin, Dutch, English, French, and German use: Its meaning is derived from the elements 'al' ; 'wis'. Alawis (Germanic), Aloys (Provençal), and Looïs (Old French) are older forms of Aloysius. The name is Latinized from Aloys, a Provençal form of Louis. It was commonly used in medieval Italy, and was borne by the Jesuit Saint Aloysius Gonzaga (1568-1591) from Lombardy. The baby name has since been commonly bestowed by Roman Catholics in honor of the saint, who is the patron saint of the young. In literature, it appears in the Evelyn Waugh novel Brideshead Revisited (1945) as the name of Lord Sebastian Flyte's beloved teddy bear.

Aloysius is a Dutch, English, German, and Scandinavian variant of the name Louis (English and French).

The name Aloisia (English and German) is the female equivalent of Aloysius.

Aloysius is uncommon as a baby name for boys. At the height of its usage in 1909, 0.023% of baby boys were given the name Aloysius. Its ranking then was #371. The baby name has since dropped out of favor, and is now of very modest use. In 2018, within the group of boy names directly linked to Aloysius, Louis was the most regularly used. 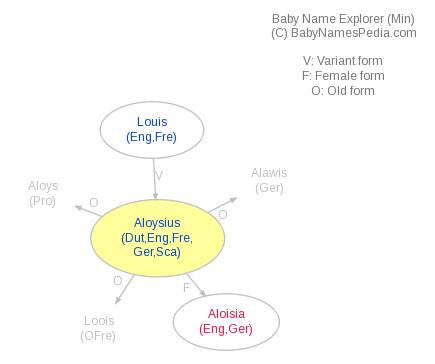