What does Alpha mean?

[ 2 syll. al-(p)ha, alp-ha ] The baby girl name Alpha is also used as a boy name, though the use for girls is more popular. It is pronounced AELFaa- †. Alpha's language of origin is Old Greek and it is predominantly used in English. The name Alpha means 'excellent; most important; first-born child'. It is derived from alpha ; aleph which means 'ox'. See Alpha for more information.

The contracted forms Al and Alph are other variants of the name.

Alpha is a rare baby girl name. At the modest peak of its usage in 1904, 0.033% of baby girls were named Alpha. It had a ranking of #333 then. The baby name has steeply slipped in popularity since then, and is of only irregular use now. Out of all girl names in its family, Alpha was nevertheless the most popular in 2018. In the last century Alpha has mainly been a baby girl name. There were 5 times more baby girls than boys who were named Alpha in 1913. 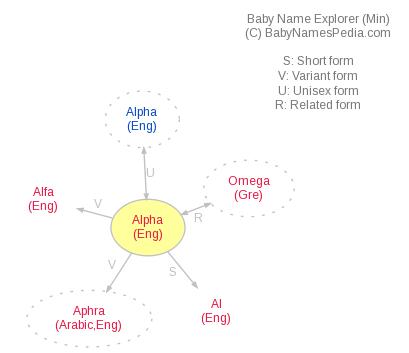