What does Alpha mean?

[ 2 syll. al-(p)ha, alp-ha ] The baby boy name Alpha is also used as a girl name, and more frequently so. It is pronounced as AELFaa- †. Alpha is used chiefly in the English language and its origin is Old Greek. The name is of the meaning excellent; most important; first-born child. The first name is derived from the name of the first letter in the Greek alphabet 'alpha', which is itself from the Hebrew or Phoenician 'aleph'. The alphabet is viewed as a symbol of the beginning much like how 'omega' represents the end; in the Bible, God is described as the Alpha and Omega. As a first name, Alpha was first adopted by English speakers in the 19th century, primarily to mean that the child is 'excellent' or 'most important'. It has also been used to denote a 'first-born child'.

Alpha is unusual as a baby name for boys. Its usage peaked modestly in 1902 with 0.011% of baby boys being given the name Alpha. Its ranking then was #584. The baby name has since markedly fallen in popularity, and is today of irregular use. Among all boy names in its group, Alpha was nonetheless the most widely used in 2018. Alpha has in the past century been predominantly given to girls. In 1913, girls named Alpha outnumbered boys by 5 times. 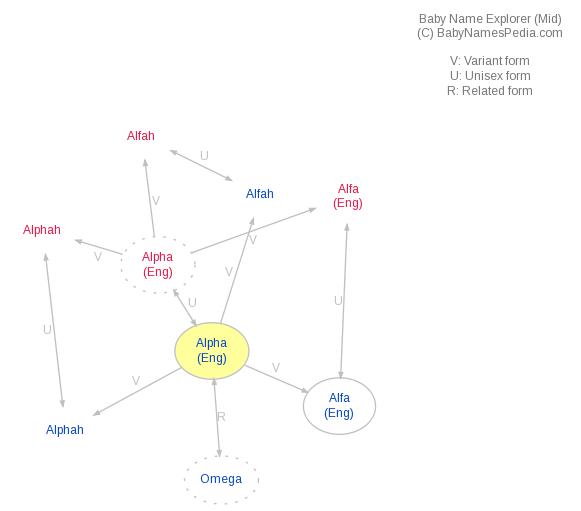