What does Althea mean?

[ 3 syll. al-(t)hea, alt-h-ea ] The baby girl name Althea is pronounced AEL-DHiy-aa- †. Althea is of Old Greek origin and it is used mainly in English. The meaning of Althea is 'wholesome, healing'. It is derived from the word althein which is of the meaning 'to heal'. Althaia (Old Greek) is an older form of the name. Althaia was the Greek name for the marshmallow plant which was believed to have healing powers. In Greek mythology, Althea was the name of the mother of Meleager the hunter. She was told at her son's birth that he would die only if a certain log of wood remained unburnt; she initially kept it safe but later set it alight in a fit of fury, thereby killing her son. The name was popularized after Richard Lovelace used it as a poetic pseudonym for his beloved in his 17th-century poem 'To Althea, from Prison'.

In addition, Althea is a contracted form of Alethea (English).

Althea has 15 variants that are used in English and foreign languages. English variants of Althea include Al, Altha, Althaia, Altheda, Altheya, Althia, Althya, Altie, Athelia, Eltha, Elthea, Eltheya, and Elthia. Another English form is the spelling variant Althaea (used in Italian as well). Altea (Polish) is a variant of the name that is used in foreign languages.

Althea is uncommon as a baby girl name. At the modest height of its usage in 1920, 0.027% of baby girls were named Althea. It was #356 in rank then. The baby name has markedly slipped in popularity since then, and is of only very light use today. Within all girl names in its family, Althea was nevertheless the most popular in 2018. 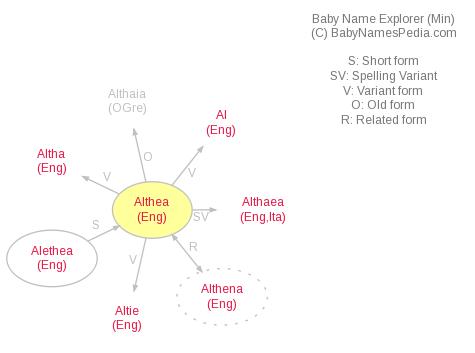