What does Alva mean?

[ 2 syll. al-va, alv-a ] The baby girl name Alva is also used as a boy name, with the latter form being slightly more popular. It is pronounced AA-LVaa- †.

Alva's language of origin is Old Norse and it is predominantly used in Scandinavian. It is derived from the word alfr with the meaning 'elf, supernatural being'. Alva is the feminine form of the Scandinavian Alf.

Alva's origin and use are both in the Irish language. The name is Anglicized from the Gaelic name Almha, which is of obscure derivation. In Irish legend, it was borne by a goddess of the Tuatha, known also as Almu. She gave her name to the hill of Almu in Leinster.

A form of the name is the Irish Almha.

Alva has its origins in the Hebrew language. It is used largely in English and Hebrew. Meaning: 'brightness, height, exalted'.

A form of the name is the English and Hebrew Alvah.

In addition, Alva is a form of the English, German, Italian, Polish, Russian, and Slavic Albina in the Czech language.

Alva is also a shortening of the Scandinavian Alfhild.

Alva is unusual as a baby girl name. Its usage peaked modestly in 1907 with 0.022% of baby girls being named Alva. It was #412 in rank then. The baby name has dropped out of favor since then, and is of only irregular use now. Among all girl names in its family, Alva was nevertheless the most widely used in 2018. 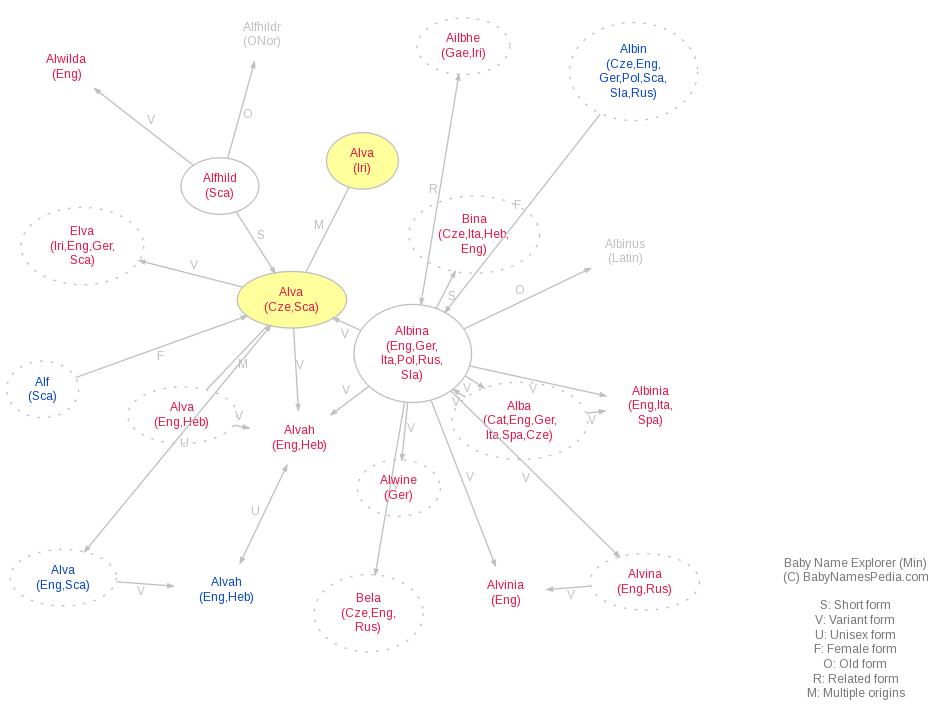