What does Alvaro mean?

[ 3 syll. al-va-ro, alv-aro ] The baby boy name Alvaro is pronounced as aeLVAA-Row- †. Alvaro is an Italian, Portuguese, Spanish, and English name of Old English and Gothic origin. From Gothic roots, its meaning is guard of all - in this context, Alvaro can be used in the English and Spanish languages. A two-element name, it is derived from the elements 'al' meaning all ; 'war' guard. Alewar (Gothic) is an older form of Alvaro. Álvaro was a Germanic surname introduced to Spain by the Visigoths, who invaded 5th-century East Germany and caused the collapse of the Roman empire. The surname has been recorded in forms such as Albarez, Alvarez, Alvares, Alvar, and Alvaro. The name was borne by various characters in the Spanish epic the Cantar de Mio Cid, known also as Song of My Cid. It was later popularized in Italy, probably due to a central character named Don Alvaro in Verdi's opera The Force of Destiny (1862).

Alvaro is an Italian, Portuguese, and Spanish variant of the name Alvar (Catalan, English, Scandinavian, and Spanish).

The name Alvara (Italian) is the female equivalent of Alvaro.

Alvaro has 18 variants that are used in English and other languages. Variants used in English include Alavaro, Alavero, Albaro, Alvar, Alvareo, Alvarez, Alvario, Alvarso, Alverio, Alvero, Àlvar, and Lalo. The diminutive forms Alvey and Alvy are other English variants. 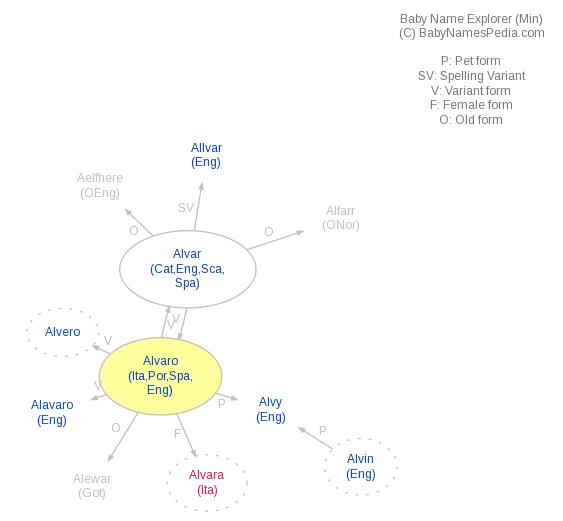