What does Alvis mean?

[ 2 syll. al-vis, alv-is ] The baby boy name Alvis is pronounced as AELVihS- †. Alvis is used mostly in the English and Scandinavian languages. It is of Old English and Old Norse origin. Old Norse origin: It is derived from the word 'alwiss' meaning all wise. An original form of Alvis is Alwiss (Old Norse). The name was borne in Norse mythology by a dwarf who fell in love with Thor's daughter Thrud and demanded her hand in marriage.

In addition, Alvis is a derivative of the English name Alvin.

Alvis is also a derivative of the English name Elvis.

Alvis is an unusual baby boy name. Its usage peaked in 1912 with 0.012% of baby boys being given the name Alvis. It had a ranking of #552 then. The baby name has experienced a steep fall in frequency since then, and is currently used on a very modest scale. In 2018, among the family of boy names directly linked to Alvis, Alvin was the most popular. 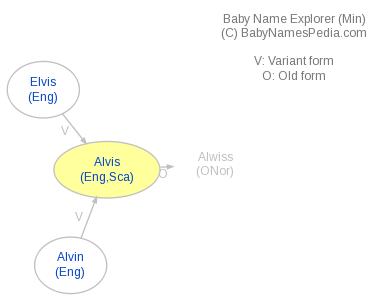