What does Alysa mean?

[ 3 syll. a-ly-sa, al-ysa ] The baby girl name Alysa is pronounced as aa-LIHS-aa- †. Alysa is primarily used in English and it is of Germanic origin.

Alysa is a form of Alice.

Alysa is also an English form of the English, Latinized, Spanish, French, and Scandinavian name Alicia.

Alysa is also an English spelling variant of the English and Hebrew name Alyssa.

Alysa is rare as a baby girl name. At the modest peak of its usage in 2001, 0.016% of baby girls were named Alysa. It had a ranking of #736 then. The baby name has suffered a marked decline in frequency since then, and is now used on a very light scale. Out of the family of girl names directly related to Alysa, Alice was the most widely used in 2018. 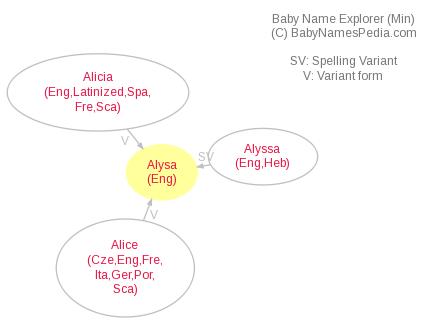