What does Amadeus mean?

[ 4 syll. a-ma-deu(s), am-ade-us ] The baby boy name Amadeus is pronounced as aaM-ah-DEY-ahS or aaM-ah-DIY-ahS in English †. Amadeus is largely used in the English and German languages, and its origin is Latin. The name's meaning is love of God. It is derived from the elements 'amare' meaning to love ; 'deus' God. The name was coined in the 17th or 18th century. It was borne by the famous Austrian composer and child prodigy Wolfgang Amadeus Mozart (1756-1791), who used it as a Latin version of Theophilos or Gottlieb. His name was later taken up by the German author better known by his pen name E. T. A. Hoffmann (1776-1822), which represented Ernst Theodor Amadeus Hoffmann. The form Amedeo has been a traditionally royal name in the house of Savoy, having been borne by various counts and dukes. The name has also been common among Italian Jews, as borne by the artist Amedeo Modigliani (1884-1920). The name Amedea (Italian) is the female equivalent of Amadeus.

The name Amadeus is widely used; it has 24 variants that are used in English and other languages. Variants used in English include Amad, Amadeaus, Amadée, Amadi, Amadou, Amati, Amato, Amatus, and Amyot.

Amadeus is a rarely used baby name for boys. It is not listed in the top 1000 names. 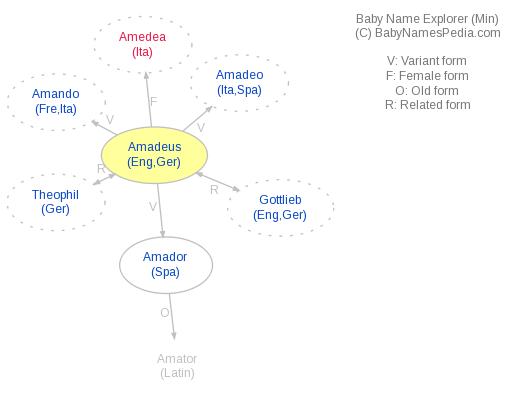