What does Amaya mean?

[ 3 syll. a-ma-ya, am-aya ] The baby girl name Amaya is pronounced as aa-MAA-Yaa- †. Amaya is of Basque and Japanese origin. It is used mainly in Basque, English, Spanish, and Japanese. From Japanese roots, its meaning is 'night rain' - in this context, Amaya can be used in the English, Japanese, and Spanish languages.

Amaya is a variation of Amaia (Basque, English, and Spanish).

Amaya is popular as a baby girl name, and it is also perceived as trendy. The name's popularity has been growing since the 1990s; before that, it was of only very modest use. Its usage peaked recently in 2018 with 0.122% of baby girls being named Amaya. It had a ranking of #130 then. Among all girl names in its family, Amaya was the most popular in 2018. Amaya was 7 times more frequently used than the next most popular name, Amayah, in that year. 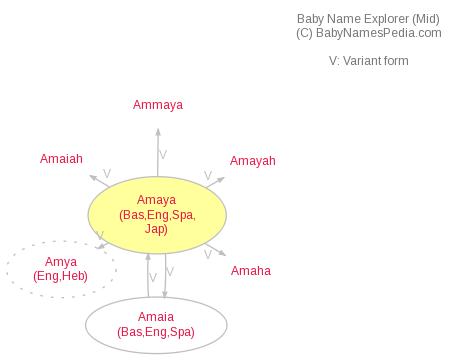