What does Ambrose mean?

[ 2 syll. am-bro-se, amb-r-ose ] The baby boy name Ambrose is sometimes used as a girl name. Its pronunciation is AEMBRow-Z †. Ambrose is largely used in the Dutch, English, German, and Scandinavian languages, and it is derived from Old Greek origins. It is derived from the element 'ambrosios' which means immortal, divine. Ambrosios (Old Greek) and Ambrosius (Latin) are older forms of Ambrose. The name was borne by Saint Ambrosius of Milan (334-340), a 4th-century bishop and one of the doctors of the early Church. The name was also borne by the 5th-century British leader Ambrosius Aurelianus, the historical basis for the legendary King Arthur himself. The name has been generally used by English speakers since the 11th century; it has been more popular in Roman Catholic Ireland than in England. It later saw a revival in the 19th century. The name Ambrosia (English and German) is the female equivalent of Ambrose.

The name Ambrose is widely used; it has 30 variants that are used in English and other languages. Variants used in English include Ambe, Ambey, Ambi, Ambroeus, Ambrosia, Ambrosios, Ambrós, and Emrys (used in Welsh as well). The contractions Am and Brose, and the pet forms Ambie and Amby are other English variants.

Ambrose is an uncommon baby name for boys. At the modest height of its usage in 1901, 0.030% of baby boys were given the name Ambrose. Its ranking then was #294. The baby name has since steeply declined in popularity, and is now of irregular use. Within all boy names in its group, Ambrose was nonetheless the most widely used in 2018. In the past century Ambrose has predominantly been a baby boy name. 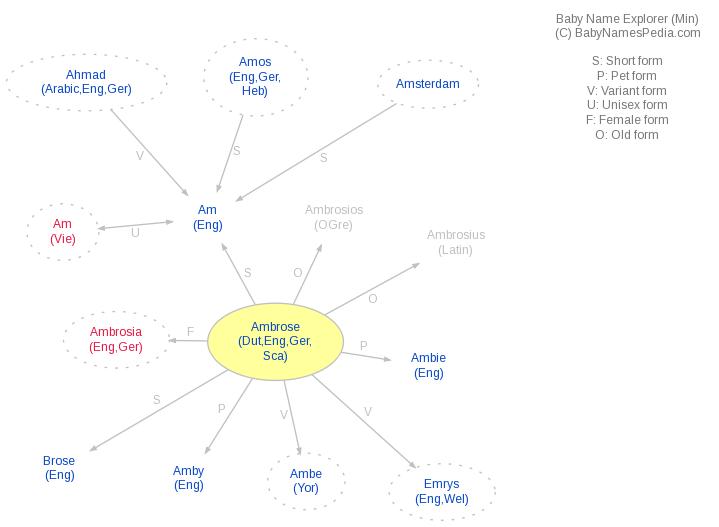