What does Amelia mean?

[ 3 syll. a-me-lia, am-el-ia ] The baby girl name Amelia is pronounced in English as ah-MIYL-Yah or ah-MIY-Liy-ah or in German as aa-MEH-Liy-aa †. Amelia has its origins in the Gothic and Latin languages, and it is used largely in English, German, Dutch, Italian, Latin, and Spanish. Latin origin, Dutch, English, German, Italian, Latin, and Spanish use: The name is derived from Aemilia (Latin), of the Latin aemulus (meaning 'imitating, rivaling'), under the influence of the Old German amal. The former gave rise to Emilia while the latter gave rise to Amalia; thus the name Amelia can also be taken as a cross of the names Amalia and Emilia. Emilia and other forms of Emily have also been used as pet forms of Amelia, which could have contributed to the adoption of the name.

The name first appeared in the English-speaking world in the Henry Fielding novel Amelia (1751). It soon became popular during the Hanoverian monarchy in the 18th century, and was known as the first name of Queen Adelaide (1792-1849), the wife of William IV, and of Princess Amelia (1783-1810), the youngest daughter of George III. In literature, it has also appeared as the name of the character Amelia Sedley in the William Makepeace Thackeray novel Vanity Fair (1847-1848). The name was later made famous by the aviator Amelia Earhart (1897-1937).

Amelia is a variation (English and German) of Amalia.

Amelia is also a variation (English and Latin) of Emily (English).

What are the Variant Forms of Amelia?

Amelia is very popular as a baby name for girls, and it is also regarded as trendy. The name's popularity has been growing since the 1960s. Its usage peaked recently in 2018 with 0.666% of baby girls being named Amelia. It ranked at #8 then. Among all girl names in its group, Amelia was the most popular in 2018. 42% more girls were named Amelia than the next most popular name, Emily, in that year. 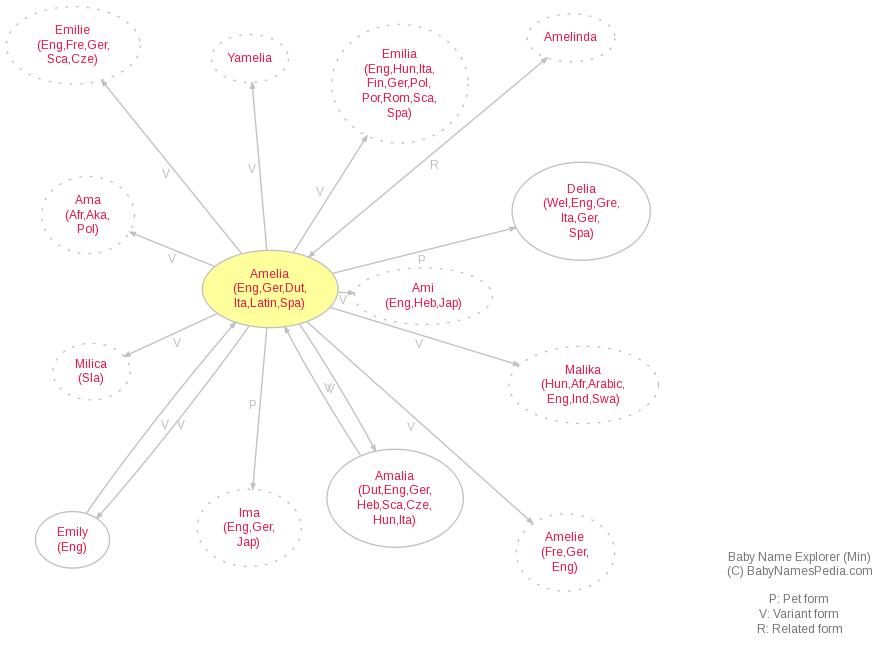