What does Amelie mean?

[ syll. a-me-lie, am-el-ie ] The baby girl name Amelie is used chiefly in the French, German, and English languages, and its origin is Gothic and Latin. The name was recently popularized as the title of the successful French movie Amélie (2001).

In addition, Amelie is a variant of Amalia.

Amelie is also a variant of the name Amelia (English, German, Dutch, Italian, Latin, and Spanish) in the French and German languages.

Amelie is also a variant of the name Amy (English) in the French language.

Amelie is also a variant of the name Emily (English) in the French language.

Amalie, Ameley, Amely, and Amélie are variants of Amelie.

Variant forms share both the origin and meaning of Amelie.

Amelie is somewhat popular as a baby name for girls. The name's popularity has been increasing since the 2000s; before that, it was of irregular use only. At the modest height of its usage in 2013, 0.024% of baby girls were given the name Amelie. It ranked at #603 then. In 2018, its usage was 0.021% and its ranking #721. Within the group of girl names directly linked to Amelie, Amelia was the most commonly used. In 2018, it was used 32 times more than Amelie.

Baby names that sound like Amelie include the name Amalee (English) and the name A'mal. 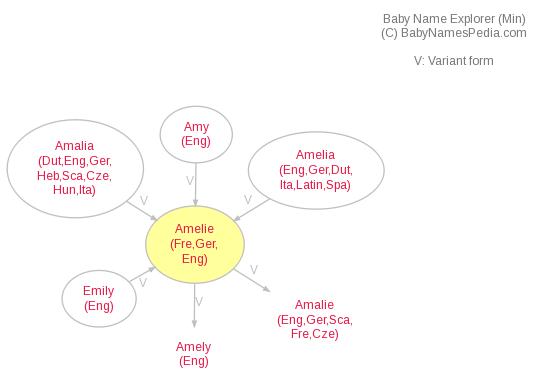