What does Amia mean?

[ syll. a-mia, am-ia ] The baby girl name Amia is pronounced as EYMIYAH †. Amia has its origins in the Sanskrit, Latin, and Hebrew languages. It is used largely in the Hebrew language.

Amia is a variant transcription of Amiya (English and Indian).

Amia is also a Hebrew variant transcription of Amy (English).

Amia is also a variant transcription of Amya (English and Hebrew).

Amia is somewhat popular as a baby girl name, and it is also considered fairly trendy. The name's popularity has been growing since the 2010s; before that, it was of only very light use. Its usage peaked modestly in 2014 with 0.020% of baby girls being given the name Amia. It had a ranking of #709 then. In 2018, it ranked at #960 with a usage of 0.015%. Among the family of girl names directly linked to Amia, Amy was the most widely used. It was more regularly used than Amia by 5 times in 2018. 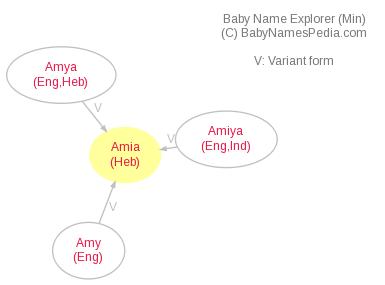