What does Aminta mean?

[ 3 syll. a-min-ta, am-i-nta ] The baby girl name Aminta is pronounced aa-MIHNTaa- †. Aminta is of Arabic and Old Greek origin. It is used mainly in English and Italian. Old Greek origin: It is derived from the word amyntor with the meaning 'protector, defender'. The name was made known by the pastoral play Aminta (1573) by the Italian poet Torquato Tasso. It was later revived during the 17th-century Restoration, and was often used as a poetic name. It later appeared as the name Minta Doyle in Virginia Woolf's novel To the Lighthouse (1927).

In addition, Aminta is a form of the African, Arabic, English, and Swahili Amina.

Aminta is the feminine equivalent of the Italian Amintore and the Greek Amyntor.

Other forms of Aminta include the English diminutive Minty and the English shortening Minta.

Aminta is not popular as a baby girl name. It is not in the top 1000 names. Within the family of girl names directly related to Aminta, Amina was the most frequently used in 2018. 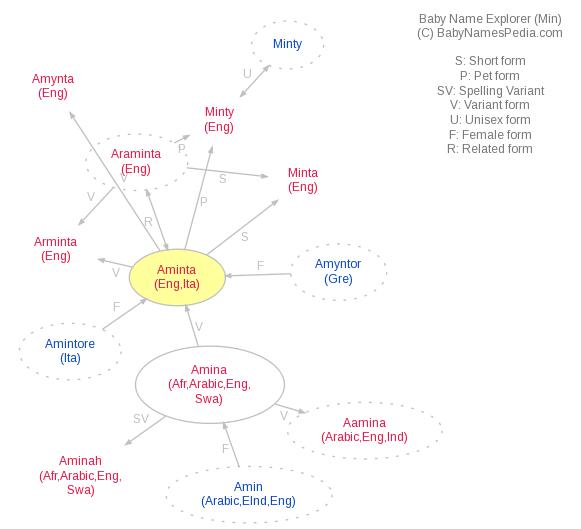