What does Amos mean?

[ 2 syll. a-mos, am-os ] The baby boy name Amos is pronounced EY-MahS in English †. Amos' origin is French and Hebrew, and its use, English, German, and Hebrew. From Hebrew roots, its meaning is 'borne by God; bearer of a burden'. It is a biblical name derived literally from the word amos which is of the meaning 'borne, carried'. The name was borne by a Hebrew shepherd and minor biblical prophet in the 8th century; his prophecies, such as those of the destruction of Judah and Israel, were collected in the Book of Amos in the Old Testament. The name was adopted by the Puritans after the Reformation, and it was used among both Jews and Christians. It has since lost its popularity due to later rustic associations.

In addition, Amos is a variation of Ames (English).

Am (contracted form in English) is another variant of the name.

Amos is an all-time favorite. Today it is still rather popular as a baby boy name, but to a lesser degree than it was previously. At the modest height of its usage in 1906, 0.082% of baby boys were named Amos. It had a ranking of #166 then. The baby name has seen a marked drop in popularity since then, and it is of only irregular use in recent times. In 2018, it ranked at #655 with a usage of 0.020%, but it was nevertheless the most popular within all boy names in its family. 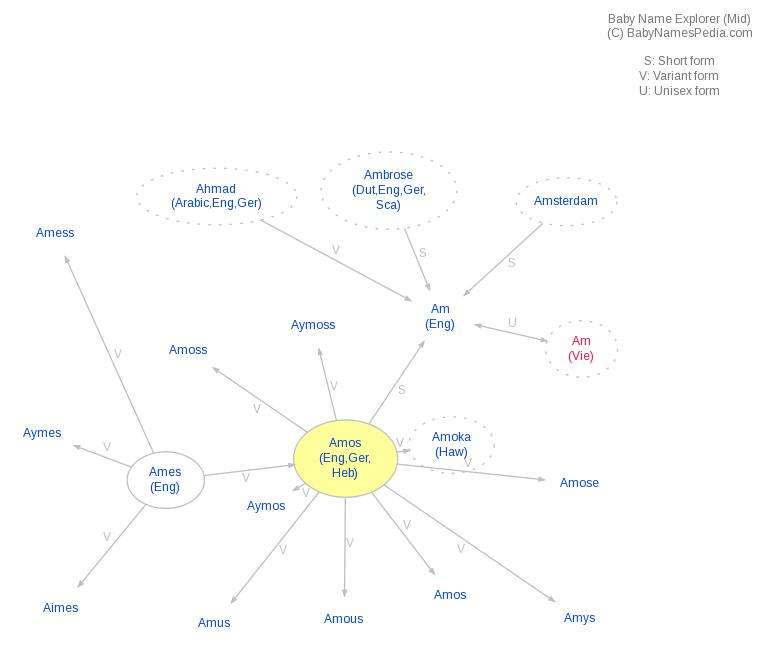