What does Amya mean?

[ 3 syll. a-mya, am-ya ] The baby girl name Amya is pronounced as aa-MAYaa- or aa-MYAA- †. Amya is mainly used in the English and Hebrew languages. It is of Japanese and Hebrew origin. From Hebrew roots, its meaning is people of God - in this context, Amya can be used in the English language. The name is of obscure origin.

Amya is a variant form of the Basque, English, Spanish, and Japanese name Amaya in the English and Hebrew languages.

The name Amia is a variant form of Amya.

Amya is rare as a baby girl name. At the modest peak of its usage in 2004, 0.035% of baby girls were given the name Amya. It was #423 in rank then. The baby name has dropped out of favor since then, and is today used on an infrequent scale. In 2018, out of the family of girl names directly linked to Amya, Amaya was the most widely used. 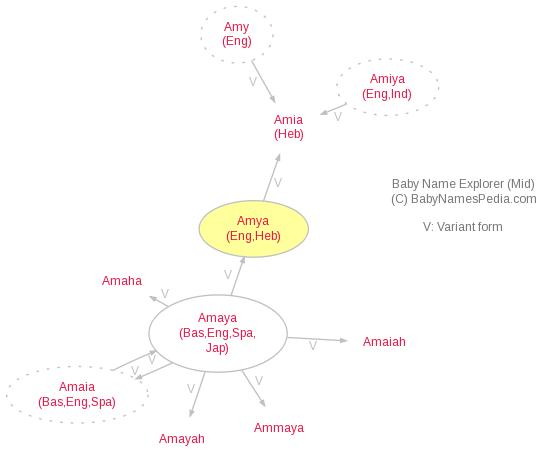