What does Amyas mean?

[ 3 syll. a-myas, am-y-as ] The baby boy name Amyas is pronounced as ahMiy-ahS †. Amyas is largely used in the English language and its origin is Latin. The name's meaning is friendship; beloved. The name is of obscure origin. It could be from the medieval Amis (Latin), a male form of Amice from 'amicitia', or else it could be from Amatus (Latin), from the element 'amatus' and ultimately 'amare'. It could also be from a French surname meaning 'man from Amiens'. It was first used by English speakers in the 16th century. In literature, it is borne by a minor character in Edmund Spenser's The Faerie Queene (1590,1596) and by the key character Sir Amyas Leigh in Charles Kingsley's Westward Ho! (1855), a British historical novel partially inspired by the Crimean War. The name Amice (English) and the name Amy (English) are the female equivalents of Amyas.

Amias (English variant spelling) is another form of Amyas.

Amyas is infrequently used as a baby name for boys. It is not listed in the top 1000 names. 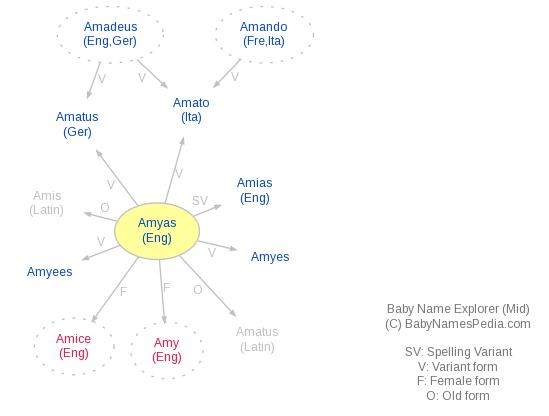