What does Anais mean?

[ 3 syll. a-nai(s), an-a-is ] The baby girl name Anais is pronounced as aa-Naa-IY-Z †. Anais is mainly used in the French language, and it is of Persian and Hebrew origin. An original form of Anais is Anaitis (Persian). In Persian mythology, Anaitis is the goddess of love.

In addition, Anais is a variant form of Anna in the French language.

Variant forms share the origin and meaning of the name Anais.

Anais is a somewhat popular baby name for girls. The name has been growing in popularity since the 2010s. Its usage peaked modestly in 2018 with 0.017% of baby girls being given the name Anais. It ranked at #848 then. In 2018, among the group of girl names directly linked to Anais, Anna was the most regularly used. It was used 13 times more than Anais in that year. 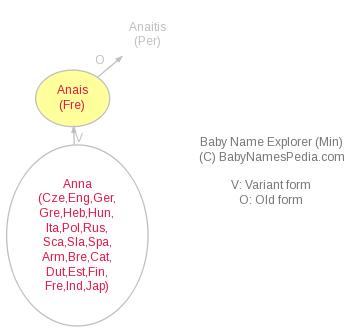