What does Andre mean?

[ 2 syll. an-dre, and-re ] The baby boy name Andre is sometimes used as a girl name. It is pronounced as ae-NDREY- †. Andre is used predominantly in the Dutch, English, French, German, and Portuguese languages, and its origin is Old Greek.

Andre is a variant (Dutch, English, French, German, and Portuguese) of Andreas.

Andre is also a variant (English, French, and Portuguese) of the name Andrew (English, Greek, and Russian).

Andre has 15 variants that are used in English and other languages. Variants used in English include Andrae, Andray, Andree, Andrei, Andrez, André, Andrie, Aundray, Aundré, and Deandre. The diminutive forms Andy, Dray, and Dre (used in Dutch and as well) are other English variants. A variant of Andre in other languages is Aundre (Greek). Another foreign variant is the diminutive form Ries (Dutch).

Andre is popular as a baby name for boys. The name's popularity jumped from the 1920s up to the 1970s. Its usage peaked modestly in 1971 with 0.133% of baby boys being given the name Andre. It ranked at #129 then. The baby name has since declined in popularity. In 2018, its usage was 0.066% and its ranking #274, but it was nonetheless the 2nd most popular after Andrew, among all boy names in its group. In 2018, it was used 6 times more than Andre. Andre has mostly been a baby boy name in the past century. 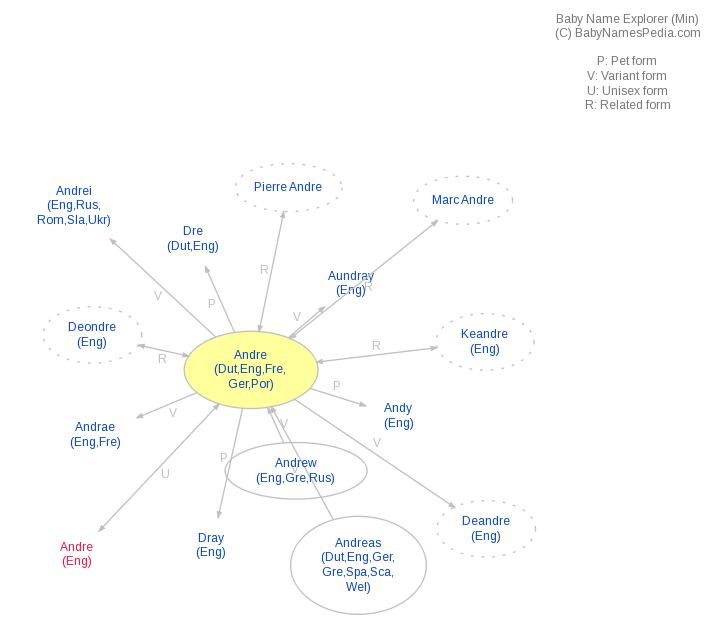