What does Andrea mean?

[ 3 syll. an-drea, and-r-ea ] The baby girl name Andrea is also used as a boy name, though it is far more popular for girls. It is pronounced aeN-DREY-ah or AEN-DRiy-ah in English or aaN-DREH-aa in German †. Andrea has its origins in the Old Greek language. It is used largely in English, Portuguese, Spanish, Czech, German, Hungarian, Italian, Scandinavian, and Slavic. The name could have evolved as a feminine form of Andrew under the influence of the Greek Andreas, itself of the Greek element andreia (meaning 'male, manly, brave, virility'), or else it could be a direct coinage from the element. It was not used in the Middle Ages, and was later adopted on an irregular basis by English speakers in the 17th century. The form Andra as an English name is a recent 20th-century invention.

In addition, Andrea is an English, Portuguese, and Spanish diminutive of the English and Greek Alexandria.

Andrea is the feminine equivalent of the English, Greek, and Russian Andrew.

What are the Variant Forms of Andrea?

The name Andrea is used to a great extent; it has 89 forms that are used in English and foreign languages. English forms of the name include Anda, Andelis, Andena, Andera, Andere, Anderea, Andis, Andrae, Andrah, Andraia, Andralyn, Andranetta, Andras, Andraya, Andre, Andreah, Andreaka, Andrean, Andreana (used in Italian as well), Andreane, Andreanna, Andreea (used in Romanian as well), Andreena, Andreja, Andreka, Andrel, Andrell, Andrelle, Andren, and Andrena. Other English forms include the contracted forms Andee, Andra (used in German, and Latin as well), and Drea, the diminutives Ande, Andi, Andie, Andree, and Andy, and the spelling variants Aindrea (used in Irish as well) and Aondrea.

Andrea is popular as a baby girl name. The name increased in popularity from the 1900s up to the 1980s. At the height of its usage in 1981, 0.653% of baby girls were named Andrea. It had a ranking of #24 then. The baby name has slipped in popularity since then. In 2018, it ranked at #134 with a usage of only 0.117%, but it was nevertheless the most popular within all girl names in its family. Andrea was 85% more frequently used than the 2nd most popular name, Alexandria, in 2018. Andrea has mainly been a baby girl name in the last century. There were 68 times more baby girls than boys who were named Andrea in 1989. 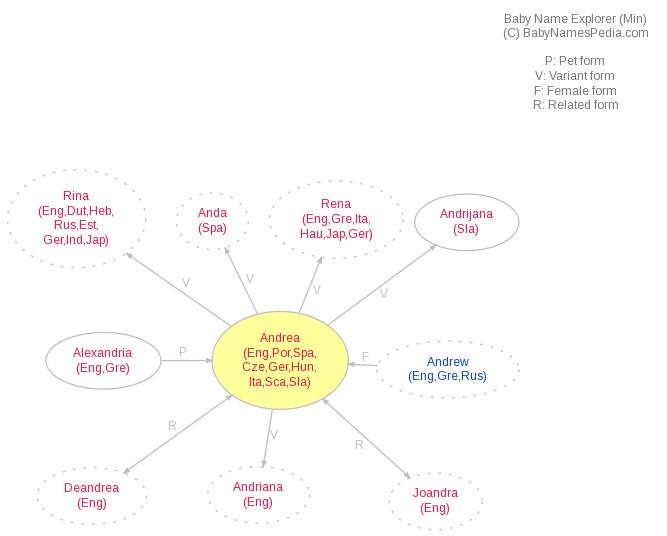