What does Angel mean?

[ 2 syll. an-gel, ang-el ] The baby boy name Angel is also used, but less often, as a girl name. It is pronounced in English as EYN-JHahL †. Angel is used predominantly in the English, Slavic, and Spanish languages, and its origin is Old Greek. The name's meaning is messenger of God, angel. A biblical name, it is derived from the elements 'angelos' meaning angel, messenger ; 'angelus' angel. Angelos (Old Greek) and Angelus (Latin) are original forms of Angel. The name is from the Church Latin name Angelus and ultimately from the Greek element 'angelos', which meant 'messenger' in classical Greek, and 'messenger of God' in New Testament Greek in reference to the celestial being. The name has been used since the Middle Ages, and it was mainly used by Roman Catholics, especially in the Mediterranean. The name was later introduced to the USA via Spanish speakers. It was primarily a male name, as in the character Angel Clare in Thomas Hardy's Tess of the d'Urbervilles (1891). The name later came to be used for girls as well due to its association with the word 'angel' as a term of endearment for a little girl. The name Angela (Dutch, English, German, Italian, Romanian, Russian, Slavic, and Spanish) is the female version of Angel.

The name Angel is used to a great extent; it has 29 variants that are used in English and other languages. Variants used in English include Anela, Ang, Angele, Angell, Angelle, Angelmo, Angelo (also used in Greek and Italian), Angie, Angil, Angy, Anjel, and Anyoli. The short form Ange is another English variant.

Angel is popular as a baby name for boys. The name's popularity rose from the 1910s up to the 2000s. Its usage peaked in 2006 with 0.529% of baby boys being given the name Angel. It ranked at #31 then. The baby name has since experienced a fall in popularity. In 2018, its usage was 0.261% and its ranking #72, but it was nonetheless the most popular among all boy names in its group. In 2018, 5 times more boys were named Angel than the subsequent ranked name, Angelo. There were times from 1970 to 1986 that the name Angel was given more often to girls, but it is more popular as a baby boy name today. In 2017, the name Angel was given to 5 times as many baby boys than girls. 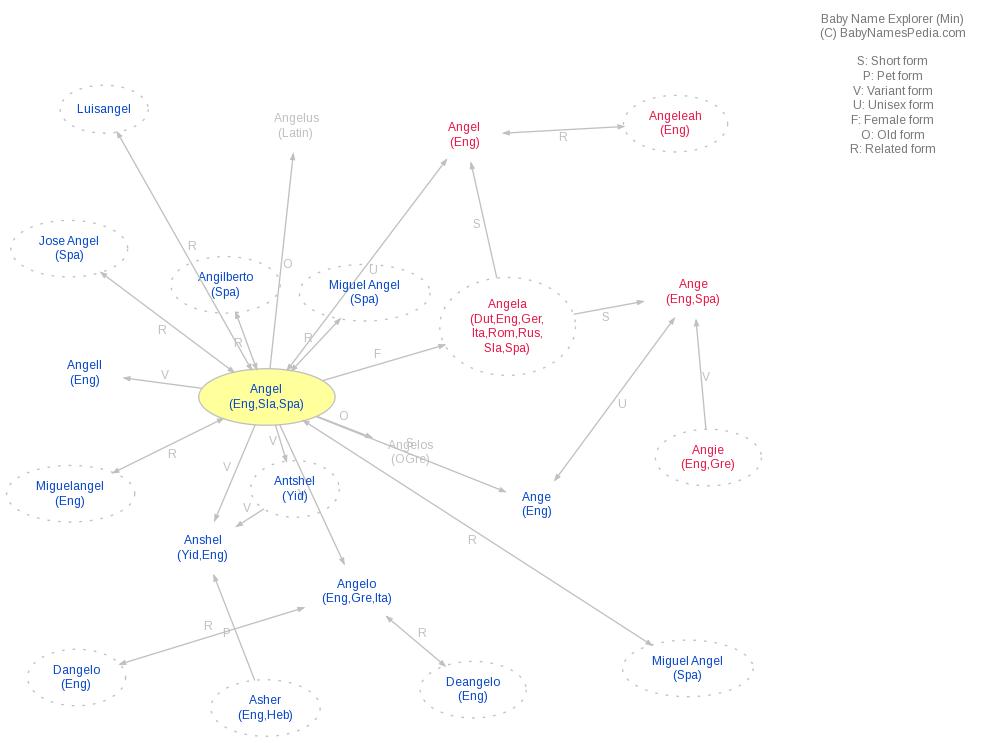