What does Angela mean?

[ 3 syll. an-ge-la, ang-ela ] The baby girl name Angela is pronounced AEN-JHahL-ah in English or aaN-JHEHL-aa in Italian †. Angela's language of origin is Old Greek. It is predominantly used in Dutch, English, German, Italian, Romanian, Russian, Slavic, and Spanish. The meaning of Angela is 'messenger of God, angel'. It is a biblical name derived from angelos meaning 'angel, messenger' ; angelus 'angel'. In the past, this was mainly a Roman Catholic name often reserved for children born on the feast of Saint Michael and All Angels on 29 September. The name was borne by Saint Angela Merici of Brescia (1474-1540) the founder of the Order of Ursulines. It was adopted by English speakers in the 18th century. In the UK, the name is often associated with the fictional dancing mouse Angelina Ballerina in the popular children's books (1982-) by Katharine Holabird, while in the US, the name is famous from the actress Angelina Jolie (1975-). Angela is the feminine form of the English, Slavic, and Spanish Angel.

What are the Variant Forms of Angela?

Angela is an all-time favorite. At present it is still a popular baby girl name, but not to the degree it was previously. The name increased in popularity from the 1900s up to the 1970s; prior to that, it was of only modest use. At the height of its usage in 1975, 1.497% of baby girls were named Angela. It was #5 in rank then. The baby name has seen a steep drop in frequency since then. In 2018, it ranked at #264 with a usage of 0.067%, but it was nevertheless the 2nd most popular after Angelina, within all girl names in its family. It was 10.000% more regularly used than Angela in 2018. The name Angela has been primarily given to baby girls, although it has also been used as a boy name in the last century. In 1977, 297 times more baby girls than boys were given the name Angela. 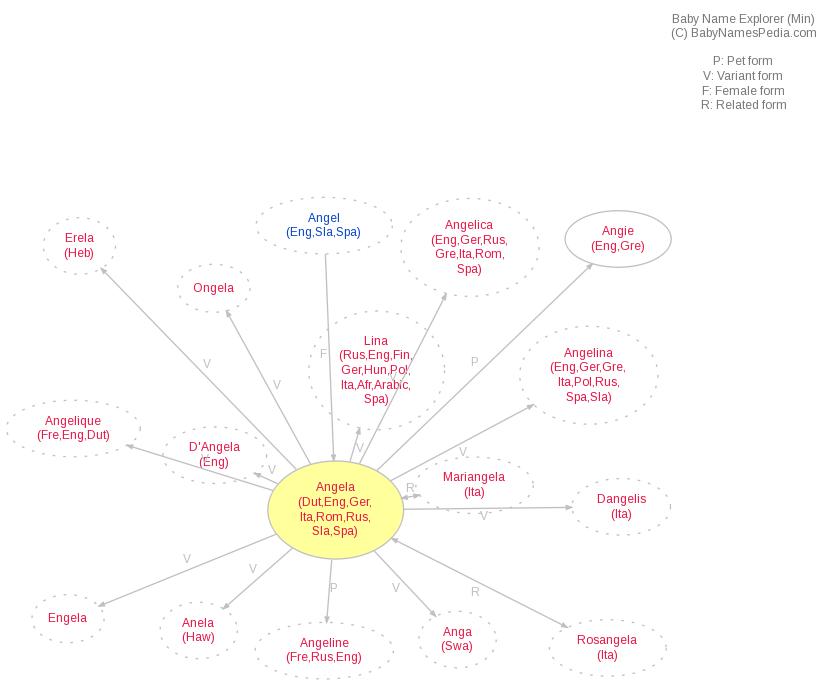