What does Angelica mean?

[ 4 syll. an-ge-li-ca, ang-el-ica ] The baby girl name Angelica is pronounced aeN-JHEHL-ih-Kah (English) or aaN-JHeh-LIY-Kaa (Italian) †. Angelica is of Old Greek and Latin origin. It is used mainly in the English, German, Russian, Greek, Italian, Romanian, and Spanish languages. Latin origin, English, Greek, Italian, Romanian, and Spanish use: It is derived from angelicus meaning 'angelic, like an angel' ; angelos 'angel, messenger' ; angelus 'angel'. The Latin angelicus (meaning 'angelic, like an angel') is ultimately of the Greek 'angelo'; thus the name is sometimes considered a variant of Angela. It was introduced to England from Italy in the 17th century. In literature, the name has appeared in Italian poet Ariosto's epic Orlando Furioso (1532) which deals with the love of Charlemagne's paladin Orlando for Angelica. Angelica is also the name of Juliet's nurse in Shakespeare's tragedy Romeo and Juliet (1595), and the name of the saucy, independent young woman in William Congreve's play Love for Love (1695).

Angelica is an English, German, and Russian form of Angela.

Angelica is rather popular as a baby girl name. The name rose in popularity from the 1950s up to the 1990s; prior to that, it was of only sporadic use. At the modest peak of its usage in 1996, 0.178% of baby girls were given the name Angelica. It was #97 in rank then. The baby name has experienced a decline in frequency since then. In 2018, it ranked at #546 with a usage of 0.030%, but it was nonetheless the 2nd most popular after Angela, out of all girl names in its family. The name was twice as popular as Angelica in 2018. 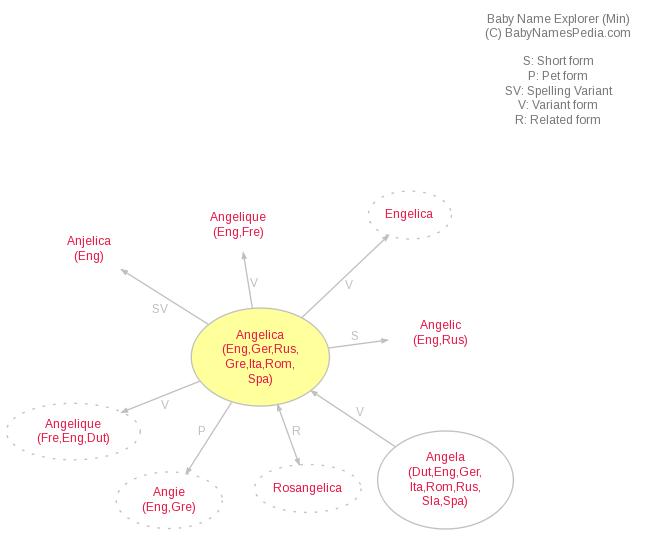