What does Angelina mean?

[ 4 syll. an-ge-li-na, ang-el-ina ] The baby girl name Angelina is pronounced in English as aeN-JHah-LIYN-ah, in Polish as aaN-Geh-LIY-Naa, or in Russian as aaN-Giy-LIY-Naa, aaN-GYeh-LIY-Naa or aaN-GYEH-Liy-Naa †. Angelina's language of origin is Old Greek, and it is predominantly used in the English, German, Greek, Italian, Polish, Russian, Spanish, and Slavic languages. The name is known from Angelina Ballerina (1982), a fictional mouse in a popular series of children's books.

In addition, Angelina is a derivative (English, German, Greek, Italian, Polish, Russian, and Spanish) of Angela.

The origin and meaning of the name Angelina is inherited by all variant forms. 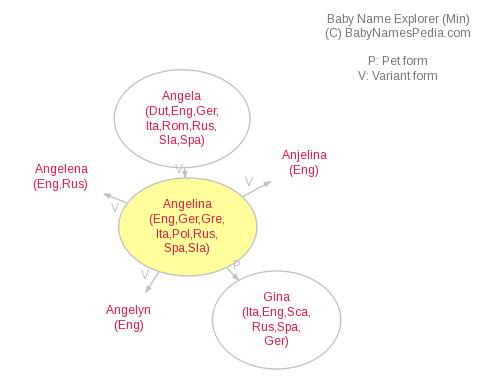