What does Angharad mean?

[ 3 syll. an-(g)ha-rad, ang-har-ad ] The baby girl name Angharad is pronounced aa-NGHHAAR-aa-D †. Angharad's language of origin is Welsh and it is also used mainly in the Welsh language. The name's meaning is 'much loved'. It is derived from car meaning 'love' ; an. The name is from the intensifier prefix 'an-' with the main element car and the noun suffix '-ad'. The use of the name among the Welsh dates back to at least the 9th century. In the 12th-century Mabinogion, a collection of medieval Welsh folk tales, Angharad was the fair lady who initially rejected Peredur but later fell in love and married him when he returned with another identity. The name was one of the rare Welsh names adopted by English speakers in the medieval period, often Anglicized as Anchoret or Ankaret. It later fell out of favor, as the prefix 'an-' could also be understood as a negative prefix rather than an intensifier meaning 'much', thus lending the meaning 'unloved' to the name. The name saw a rebound in use in 20th-century Wales, promoted by the Welsh actress Angharad Rees (1949-).

Angharad is not regularly used as a baby name for girls. It is not listed in the top 1000 names. 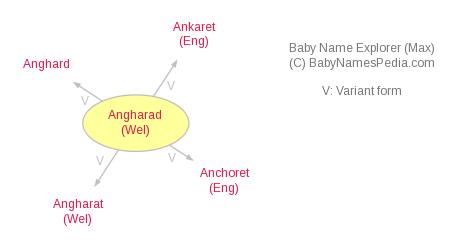