What does Angie mean?

[ 2 syll. an-gie, ang-ie ] The baby girl name Angie is also used as a boy name, though it is far more popular for girls. It is pronounced AENJH-iy †. Angie has its origins in the Old Greek and Latin languages. It is used largely in English and Greek.

In addition, Angie is a familiar form of Angela in the English and Greek languages.

Angie is also a familiar form of Angelica in the English language.

Forms of Angie include the names Ange, Angee, Angey, Angi, and Anjee.

Another form of the name is the English spelling variant Angy.

Angie is an all-time favorite. At present it is still somewhat popular as a baby girl name, but not to the degree it was before. The name grew in popularity from the 1950s up to the 1970s. At the peak of its usage in 1975, 0.125% of baby girls were named Angie. It was #139 in rank then. The baby name has experienced a drop in frequency since then. In 2018, it ranked at #716 with a usage of only 0.021%. Out of the family of girl names directly related to Angie, Angela was the most regularly used. The name was thrice as popular as Angie in 2018. Angie has primarily been a baby girl name in the last century. 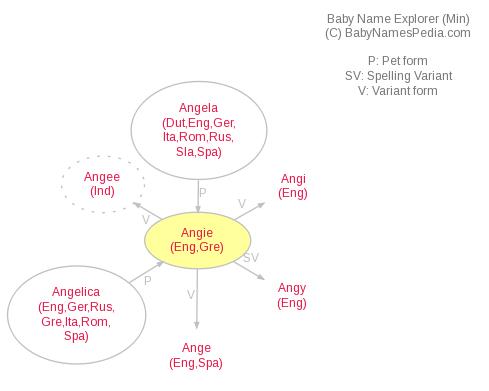