What does Anita mean?

[ 3 syll. a-ni-ta, an-ita ] The baby girl name Anita is pronounced aa-NIY-Taa (Spanish) †. Anita's language of origin is Hebrew. It is predominantly used in English, Finnish, Indian, Italian, Spanish, German, and Slavic. The name first developed as a Spanish diminutive of Ana, and it was later adopted by English speakers in the 19th century.

Anita is a familiar form (English, Finnish, Indian, Italian, and Spanish) of Ana.

Anita is also a variation (Spanish) of Ann (English and Greek).

Anita is also a familiar form (English and Spanish) of Anna.

Anita has 21 variations that are used in English and foreign languages. English variations of the name include Aneeta, Aneetah, Aneethah, Anetha, Anitha, Anithah, Anitia, Anitra, Anitta, Anittah, Anitte, Annite, Annitra, Annitta, Anyta, Lanita, and Nenita. Other English forms include the contracted form Nita (also used in Indian, and Spanish), and the spelling variant Annita. Aneta (Czech) and Annida (Greek) are variations of Anita that are used in foreign languages.

The origin and thus the meaning of Anita is inherited by all variant forms.

Anita is a rare baby girl name. At the peak of its usage in 1958, 0.280% of baby girls were named Anita. It was #82 in rank then. The baby name has fallen from favor since then, and is currently of only very modest use. In 2018, out of the family of girl names directly related to Anita, Anna was the most regularly used. 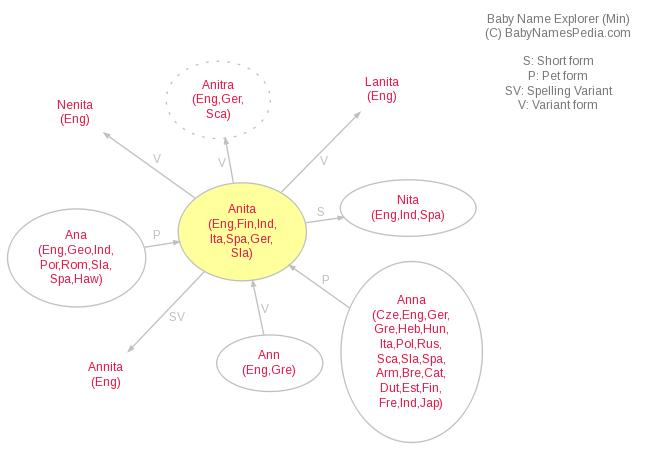