What does Aniya mean?

[ 3 syll. a-ni-ya, an-iya ] The baby girl name Aniya is pronounced as AA-Niy-Yaa- †. Aniya's language of origin is Polish and Hebrew. It is predominantly used in the English, Polish, and Russian languages.

Aniya is a variant transcription of Aniyah (English).

Aniya is also a variant transcription of Anna.

Variation transcriptions of Aniya include Anaya, Aneya, and Aniyah (English).

Variant forms inherit the origin and meaning of Aniya.

Naya (familiar form in ) is another variant of Aniya.

Aniya is a somewhat popular baby girl name. The name's popularity jumped from the 1990s up to the 2000s; before that, it was of only infrequent use. Its usage peaked modestly in 2005 with 0.061% of baby girls being given the name Aniya. It was #261 in rank then. The baby name has experienced a drop in popularity since then. In 2018, it ranked at #714 with a usage of 0.022%. Among the family of girl names directly linked to Aniya, Anna was the most popular. It was 10 times more popular than Aniya in 2018. 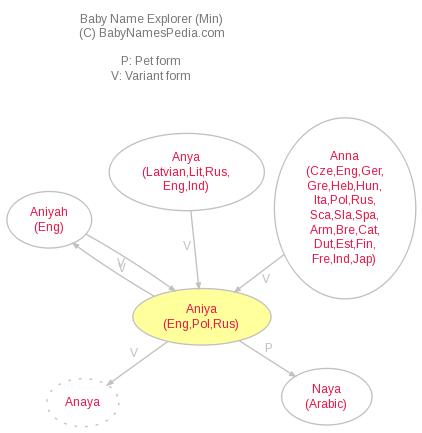