What does Anna mean?

[ 2 syll. an-na, ann-a ] The baby girl name Anna is pronounced as AEN-ae (English), AAN-Naa (Dutch, Italian, Polish), or AA-Naa (German, Russian) †. Anna is used predominantly in Czech, English, German, Greek, Hebrew, Hungarian, Italian, Polish, Russian, Scandinavian, Slavic, Spanish, Armenian, Breton, Catalan, Dutch, Estonian, Finnish, French, Indian, and Japanese. Its origin is Old Greek and Hebrew. From Hebrew roots, its meaning is God was gracious, God has shown favor - in this context, Anna can be used in the Armenian, Breton, Catalan, Czech, Dutch, English, Estonian, Finnish, French, German, Greek, Hungarian, Indian, Italian, Japanese, Polish, Russian, Scandinavian, and Slavic languages. A biblical name, it is derived from the word 'channah' with the meaning grace, favor. Anna (Latin and Old Greek) was originally the Greek or Latin form of Channah (Hebrew) or Hannah. In the Old Testament of the Bible, Hannah was the mother of the prophet Samuel. In the New Testament, Anna was a devout Jewish prophetess who prophesied about Jesus. Anna also appeared in Virgil's Aeneid (1st century BC) as the name of the sister of Dido, Queen of Carthage. According to an apocryphal gospel as well as tradition, Saint Anna was also the mother of the Virgin Mary; she was particularly venerated in the Byzantine Empire, which made the name popular there.

The name later spread to Russia, and then to France after King Henry I married the Russian princess Anna Yaroslavna (1024-1075) in the 11th century. The name was popular with the Russian and European royal families, and it was subsequently adopted in many European countries. Among English speakers, the name came into general use in the 18th century, together with the forms Ann and Anne. The name was later known from the titular heroine of the novel Anna Karenina (1873-1877) by the Russian writer Tolstoy.

What are the Variant Forms of Anna?

Anna is a classic favorite. Today it is still a popular baby girl name, but not to the degree it was before. At the peak of its usage in 1901, 1.936% of baby girls were named Anna. It had a ranking of #3 then. The baby name has experienced a loss in popularity since then, and it is used on a modest scale in recent times. In 2018, its usage was only 0.225% and its ranking #54, but it was nevertheless the 2nd most popular after Hannah, out of all girl names in its family. In 2018, it was more frequently used than Anna by 36% . The name Anna has been mainly given to baby girls, though it has also been used as a boy name in the last century. There were 173 times as many baby girls than boys who were named Anna in 1930. 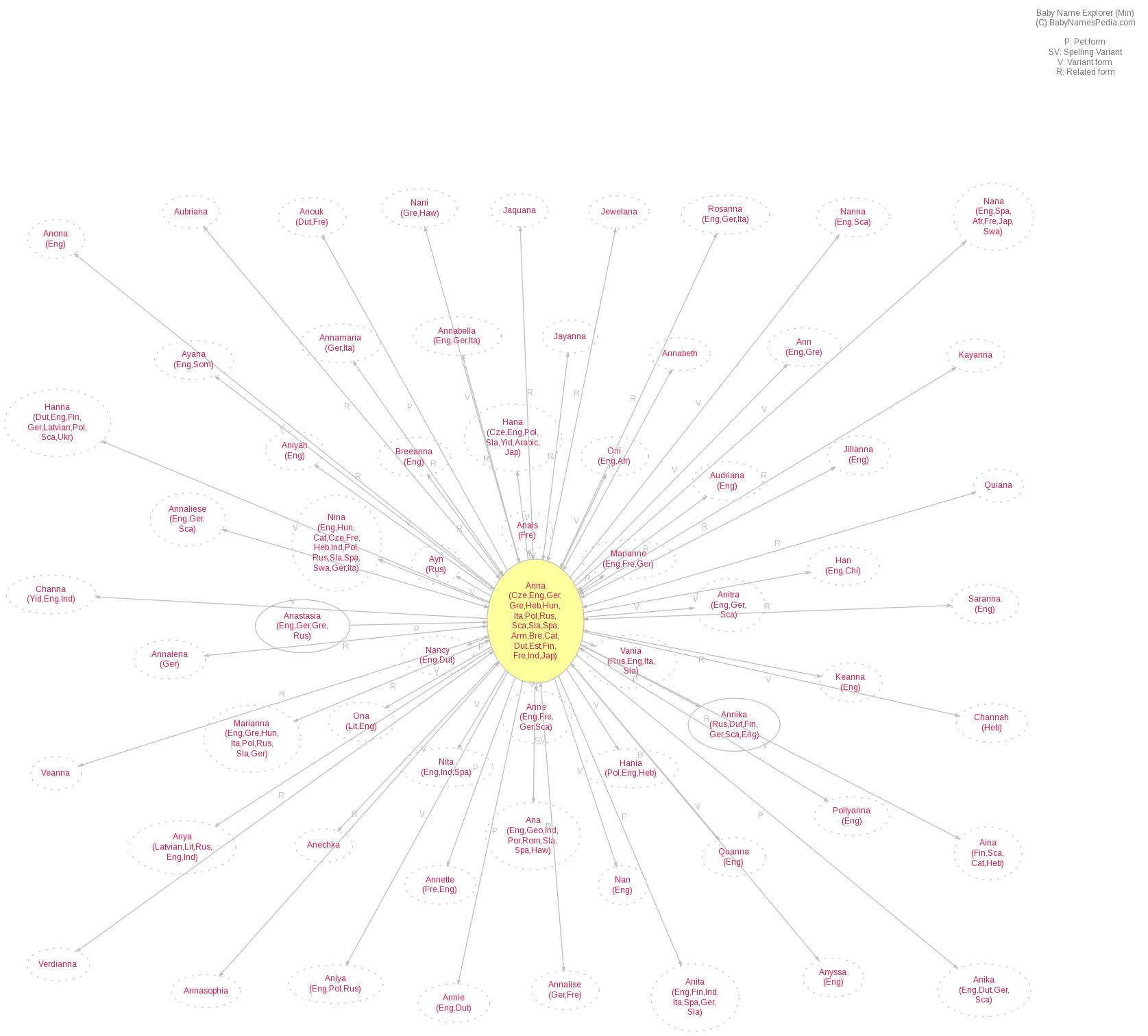