What does Annie mean?

[ 2 syll. an-nie, ann-ie ] The baby girl name Annie is pronounced as AEN-iy- †. Annie is mainly used in the English and Dutch languages. It is of Hebrew origin. The name was first popularized among English speakers by the Scottish song Annie Laurie (1834-1835). The song was based on a poem written by William Douglas (1672-1748) to his love interest Anne Laurie when he was a soldier. Among Americans, the name was later made known by Little Orphan Annie (1924-1939), a daily comic strip created by Harold Gray which gave rise to the Broadway musical Annie (1977-) and subsequent film adaptations (1982,1999).

Annie is a familiar form of the English and Greek name Ann.

Annie is also a familiar form of Anna in the English language.

Annie is also a familiar form of the English, French, German, and Scandinavian name Anne in the English language.

Variant forms share the origin and meaning of the name Annie.

Another variant of Annie is the English short form Ann.

Annie is a classic favorite. At present it is still rather popular as a baby girl name, but to a lesser degree than it was before. In 1900, 1.046% of baby girls were given the name Annie. It was #11 in rank then. The baby name has suffered a substantial decline in frequency since then, and is of modest use in recent years. In 2018, its usage was only 0.059% and its ranking #308, but it was nonetheless the 2nd most popular after Anna, out of all girl names in its family. In 2018, it was 4 times more commonly used than Annie. The name Annie has primarily been a girl name, though it has also been given to boys in the last century. In 1937, 92 times more girls than boys were given the name Annie. 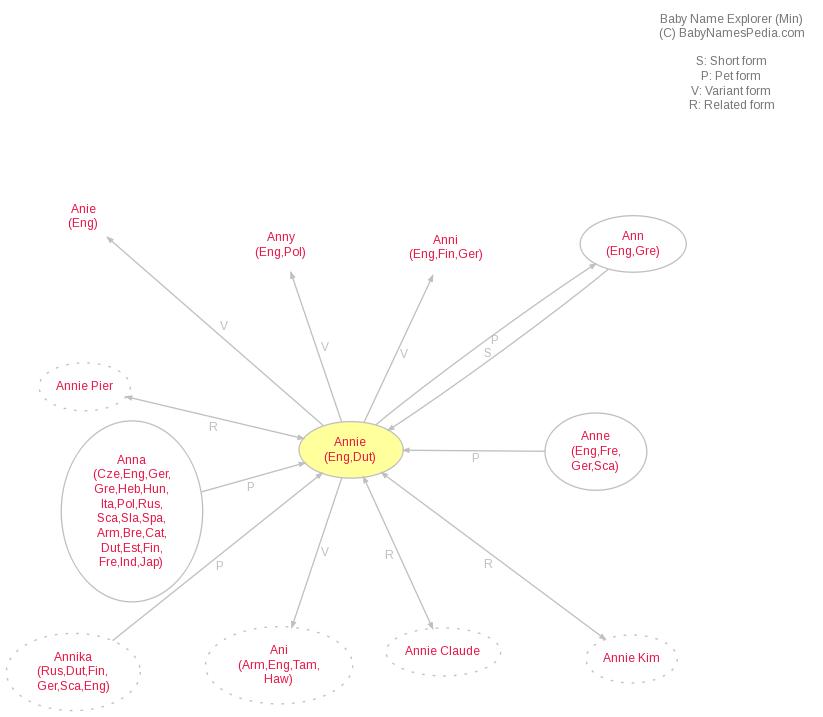