What does Anthea mean?

[ 3 syll. an-(t)hea, ant-h-ea ] The baby girl name Anthea is pronounced AEN-DHiy-aa- †. Anthea is of Old Greek origin. It is used mainly in English and German. It is derived from the word antheios which is of the meaning 'flowery, blossom'. An old form of the name is Antheia (Old Greek). Anthea was one of the bynames of the goddess Hera in Greek mythology. In literature, it has been used since the 4th century AD. A soft-sounding Greek name, it later became popular with 17th-century English pastoral poets such as Robert Herrick, thereafter reviving its use in modern times. The name has also been recently brought to attention through the British television presenter Anthea Turner (1960-). Anthea is the feminine form of the Italian Anteo.

Anthea has 16 forms that are used in English and foreign languages. English forms of Anthea include Antha, Anthe, Antheah, Antheemia, Antheia, Anthemia, Anthemya, Anthia, Anthya, Anthymia, Antia, and Thia. Another English variant is the familiar form Ann (used in Greek as well). Forms used in foreign languages include the Italian Antea and the Greek Anthoula. The spelling variant Annthea (Greek) is another foreign form.

Anthea is uncommon as a baby girl name. It is not in the top 1000 names. Out of the family of girl names directly related to Anthea, Samantha was the most widely used in 2018. 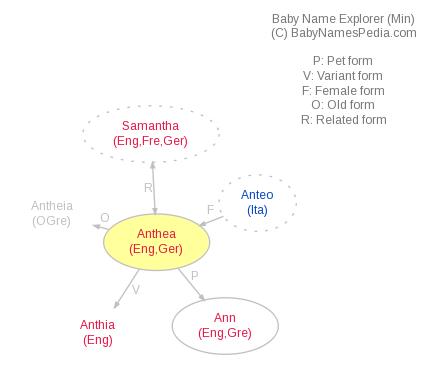