What does Anthony mean?

[ 3 syll. an-(t)ho-ny, ant-h-ony ] The baby boy name Anthony is also used as a girl name, but the use for boys is much more common. Its pronunciation is AENTahN-iy- or AEN-THahN-iy- †. Anthony is largely used in the English language and it is derived from Latin origins. The name is of the meaning priceless, inestimable.

The first name is from the Roman family name Antonius (Latin), of which the most famous member is Mark Antony, the follower of Julius Caesar; his name in Latin is Marcus Antonius. His story is well-known from the Shakespeare tragedy Antony and Cleopatra (1623). The Roman family name is of obscure and probably Etruscan origin, although there were erroneous attempts to associate it with the Greek element 'anthos' meaning 'flower'. These attempts led to the '-th-' spelling of the name, especially after the Reformation. Others suggest the meaning 'priceless' or 'inestimable'.

The name was borne by various early saints, notably Saint Anthony the Great (251-356), who founded Christian monasticism; and Saint Anthony of Lisbon and Padua (1195-1231), one of the most well-loved saints of the Roman Catholic Church. The name has been generally used in English speaking countries since the 12th century. In literature, the name is known from Sir Anthony Absolute in Richard Brinsley Sheridan's comedy The Rivals (1775), and the short form from Tony Lumpkin in Oliver Goldsmith's comedy She Stoops to Conquer (1773). The name Antonia (Dutch, English, German, Italian, Polish, Portuguese, Scandinavian, and Spanish) is the female equivalent of Anthony.

What are the Variant Forms of Anthony?

The name Anthony is widely used; it has 87 variants that are used in English and other languages. Variants used in English include Anfernee, Anothony, Anth, Anthany, Anthian, Anthny, Anthone, Anthoni, Anthonie, Anthonio, Anthoy, Antoney, Antonia, Antwan (also used in Arabic), Antwon, Atonio, and Toni (also used in Finnish, German, Hungarian, Italian, Portuguese, Slavic, and Spanish). Other English forms include the short form Tony (also used in Greek, and Latin), the pet forms Andy, Tone, and Toney, and the variant spellings Anthoney and Antony.

Anthony is a classic favorite. Currently it is still a very popular baby name for boys, though it was in more widespread use before. The name's popularity rose from the 1900s up to the 1980s; before that, it was of occasional use only. At the peak of its usage in 1987, 1.187% of baby boys were given the name Anthony. Its ranking then was #17. The baby name has since experienced a fall in popularity. In 2018, its usage was 0.415% and its ranking #38, but it was nonetheless the most popular out of all boy names in its group. In 2018, Anthony was thrice as popular as the next most popular name, Antonio. In the past century Anthony has predominantly been a baby boy name. In 1988, baby boys named Anthony outnumbered girls by 127 times. 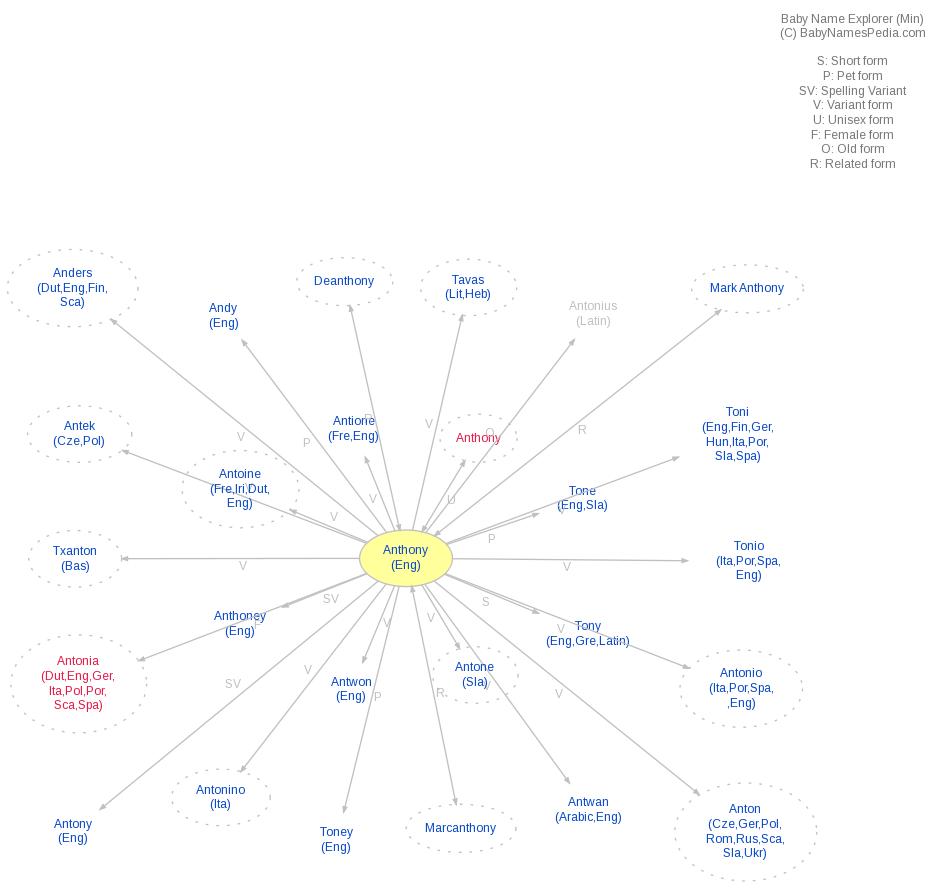