What does Antoine mean?

[ 2 syll. an-toi-ne, ant-o-ine ] The baby boy name Antoine is pronounced as ae-NTWAE-N †. Antoine is used predominantly in the French, Irish, Dutch, and English languages, and its origin is Latin. The name is popular with Afro-Americans.

Antoine is a variant (French and Irish) of the name Anthony (English).

The name Antoinette (English and French) is the female version of Antoine.

The name Antoine is used to a great extent; it has 30 variants that are used in English and other languages. Variants used in English include Anntoin, Antawn, Anthoine, Antione, Antjuan, Antoinne, Antonio, Antonyo, Antuan, Antuwain, Antuwaine, Antuwayne, Antuwon, Antwahn, Antwain, Antwaine, Antwan, Antwane, Antwann, Antwanne, Antwaun, Antwohn, Antwoin, Antwoine, Antwon, Antwone, and Atoine. The pet form Toine is another English variant. A variant of Antoine in other languages is Titouan (French). Another foreign variant is the pet form Twan (Dutch).

The origin and meaning of Antoine is inherited by all variant forms.

Antoine is unusual as a baby name for boys. Its usage peaked modestly in 1976 with 0.044% of baby boys being given the name Antoine. Its ranking then was #271. The baby name has since experienced a substantial loss in popularity, and is currently of irregular use. In 2018, among the group of boy names directly linked to Antoine, Anthony was the most widely used. 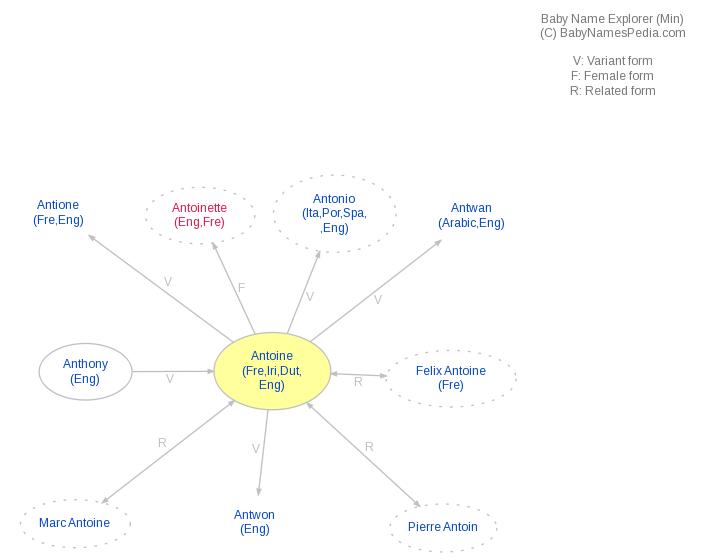