What does Antonina mean?

[ 4 syll. an-to-ni-na, ant-on-ina ] The baby girl name Antonina is pronounced in Polish as aaN-Tao-NIY-Naa or in Russian as aaN-Taa-NIY-Naa †. Antonina has its origins in the Latin language. It is used largely in English, Italian, Polish, Russian, Spanish, and German. From the Roman family name.

Antonina is a form of the English and French Antoinette.

Antonina is also a form of Antonia in the English, Italian, Polish, Russian, and Spanish languages.

Antonina is the feminine form of the Italian Antonino.

Variant forms share the origin and meaning of the name Antonina.

Antonina is unusual as a baby girl name. Its usage peaked modestly in 1915 with 0.006% of baby girls being named Antonina. It was #866 in rank then. The baby name has dropped in popularity since then, and is used only on a very light scale today. In 2018, among the family of girl names directly related to Antonina, Nina was the most regularly used. 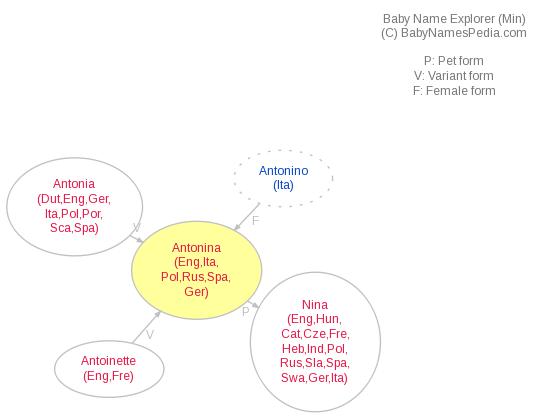