What does Antonio mean?

[ 4 syll. an-to-nio, ant-on-io ] The baby boy name Antonio is pronounced aeNTOW-Niy-ow- †. Antonio has its origins in the Latin language. It is used largely in the Italian, Portuguese, Spanish, and English languages. Antoninus (Latin) is an older form of Antonio.

Antonio is a variant of Anthony (English) in the Italian, Portuguese, and Spanish languages.

Antonio is also a variant of Antoine (French, Irish, Dutch, and English).

Antonio has 16 variants that are used in English and foreign languages. Variants of the name used in English include Anthonio, Antoinio, Antonin, Antonín, Antonnio, Antonyia, and Antonyo. The contraction Tonio (used in Italian, Portuguese, Spanish, too) is another English variant.

Variant forms share both the origin and meaning of Antonio.

Antonio is an all-time favorite. At present it is still popular as a baby boy name, but to a lesser degree than it was previously. The name's popularity jumped from the 1940s up to the 1990s. At the height of its usage in 1997, 0.254% of baby boys were given the name Antonio. It was #75 in rank then. The baby name has seen a decline in popularity since then. In 2018, it ranked at #163 with a usage of 0.122%. Within the family of boy names directly linked to Antonio, Anthony was the most frequently used. The name was thrice as popular as Antonio in 2018. 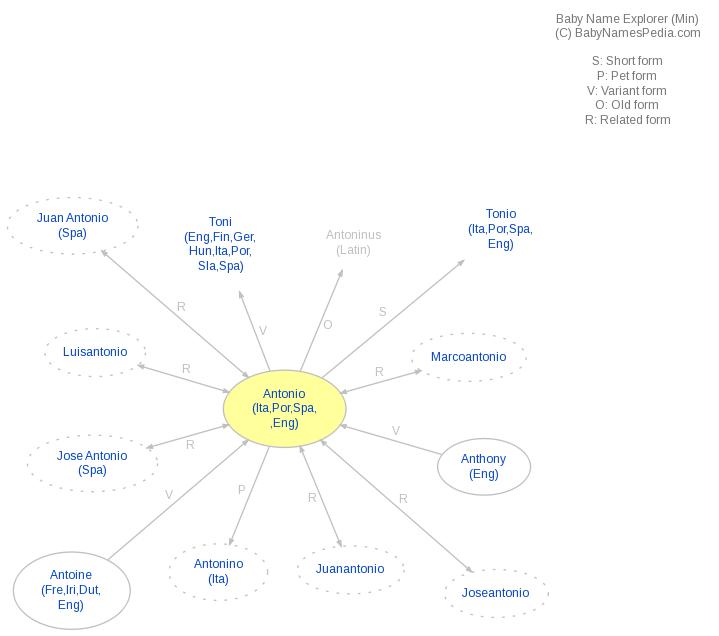