What does Aphra mean?

[ 2 syll. ap-hra, aph-ra ] The baby girl name Aphra is pronounced as AHF-Raa- †. Aphra is used chiefly in Arabic and English, and it is derived from Latin, Arabic, Old Greek, and Hebrew origins. Hebrew origin, English use: A biblical name, it is literally from the word 'aphra' with the meaning dust. The name is of obscure origin; in the Bible it was derived from a place name 'the house of Aphrah'. This phrase has sometimes been misinterpreted, which led to Aphrah being mistaken as a personal name when it actually meant a place name denoted as 'dust'. The name could also have evolved from an ancient Irish name Afric or the Late Latin name Afra. It was later taken to imply people of dark hair and color. The name was also borne by early saints martyred under Hadrian and Diocletian, and is most well-known from playwright, author, and spy Aphra Behn (1640-1989); her name has also been recorded variously as Afra and Ayfara. In literature, the rare diminutive Affery has appeared in the Charles Dickens novel Little Dorrit (1857).

Aphra is a variant of the name Afra (English and Iranian).

Aphra is also a variant of the name Afra (Arabic).

Aphra is also a variant of the name Alpha (English).

The names Aphrah and Ofra are variants of Aphra.

Affery (English diminutive form) is another variant of the name.

Aphra is seldom used as a baby name for girls. It is not listed within the top 1000 names. 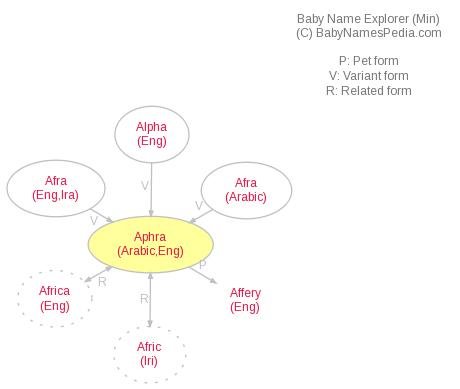