What does Apollo mean?

Apollo is largely used in the Italian language and its origin is Old Greek. It is derived from the element 'apollymi' meaning to destroy. Apollon (Old Greek), Apollonios (Old Greek), and Apollonius (Latin) are old forms of Apollo. The name is often taken to derive from Old Greek, but it could ultimately be of Indo-European origin. It is known from Apollo, son of Zeus and Leto, and twin brother of Artemis in Greek mythology. He was the god of healing, archery, poetry, beauty, and prophecy, and he was also later known as the god of light and the sun. The name Apollonia (English, German, and Polish) is the female equivalent of Apollo.

Apollo has 12 variants that are used in English and other languages. Variants used in English include Apolinar, Apollon, Apollos, Apolo, Apolonio, Appollo, Appolo, Appolonio, and Pollo. The short form Polo is another English variant. Apollonios (Greek) and Apollonius (German) are foreign variants of Apollo.

Apollo's origin is Indoeuropean. It is derived from the element apelo with the meaning 'strength'. The generic name has been used in Greek mythology.

Apollo is fairly popular as a baby name for boys, and it is also perceived to be trendy. The name has been rising in popularity since the 2010s; prior to that, it was of only very light use. At the modest peak of its usage in 2018, 0.028% of baby boys were named Apollo. Its ranking then was #517. Out of all boy names in its group, Apollo was the most widely used in 2018. 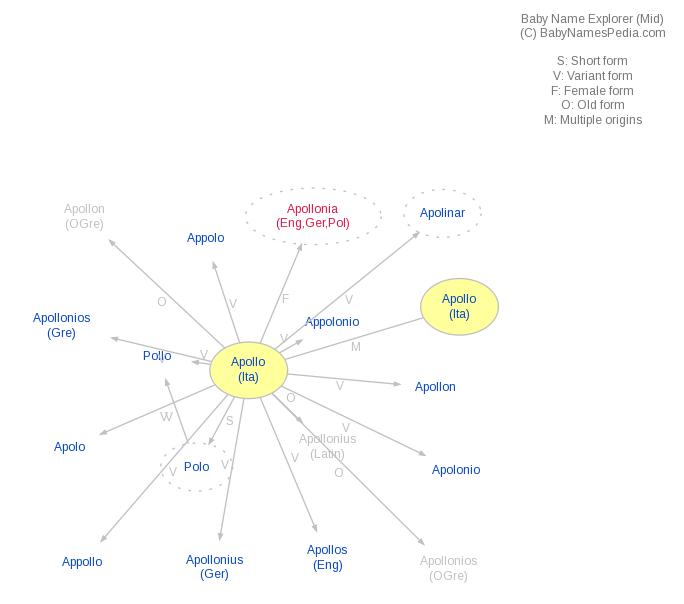