What does Aquila mean?

[ 3 syll. a-qui-la, aq-u-ila ] The baby boy name Aquila is also used as a girl name. It is pronounced in English as AEK-WihL-ah or ah-KWIHL-ah †. Aquila is largely used in the English language and it is derived from Latin origins. The name is of the meaning eagle. In the Bible, the name was borne by a tent-maker; Paul lived with him and his wife Prisca in Corinth for a period. The name Aquilina (Spanish) is the female equivalent of Aquila.

Aquila has 18 variants that are used in English and other languages. Variants used in English include Acquilino, Akila, Akilino, Akilla, Aquil, Aquilas, Aquileo, Aquiles, Aquilina, Aquill, Aquillino, Aquyl, and Aquyll. The variant spellings Acquila, Acquilla, and Aquilla are other English forms. Acilino (Spanish) and Aquilino (Spanish) are foreign variants of Aquila.

Aquila is unusual as a baby name for boys. It is not listed in the top 1000 names. 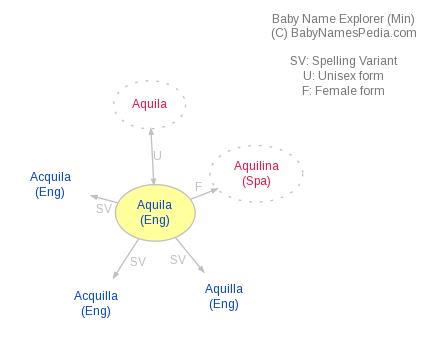