What does Arabella mean?

[ 4 syll. a-ra-bel-la, ar-abe-lla ] The baby girl name Arabella is pronounced as AA-Raa-BEHLLaa- †. Arabella is largely used in English, German, and Italian. Its origin is Latin. Arabel (Scottish), Arbel (Scottish), and Orable (Scottish) are original forms of the name. The name could be an elaborated form of medieval Scottish forms of Annabel, such as Orable (Scottish), Arabel (Scottish), or 'Arble'. It could also be from the Latin 'orabilis' (meaning obliging, invokable in prayer) and ultimately 'orare', or else influenced by these elements. The name was adopted by English speakers during the Middle Ages, and was popular in Scotland. It was also widely used among the 18th-century English aristocracy after Alexander Pope wrote his satirical work 'The Rape of the Lock' (1712). The poem was based on an incident recounted by his friend on the real Arabella Fermor. Arabella Stuart (1575-1615), known also as Arbella, was an English noblewoman who was for a while considered a possible successor to Queen Elizabeth I.

Arabella is popular as a baby girl name, and it is also regarded as fairly trendy. The name's popularity has been increasing since the 2000s; before that, it was of infrequent use only. At the modest height of its usage in 2017, 0.100% of baby girls were named Arabella. It was #157 in rank then. In 2018, its usage was 0.091% and its ranking #174, and it was the 2nd most popular after Bella, within all girl names in its family. In 2018, the name was thrice as popular as Arabella. 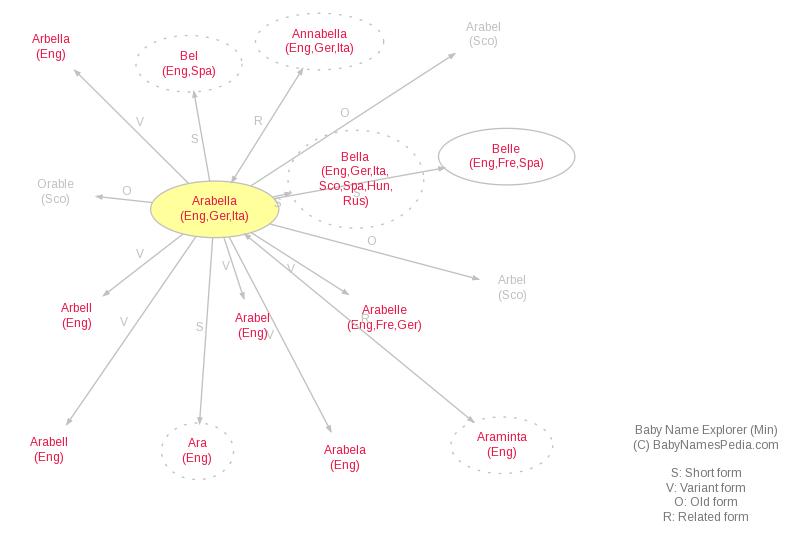