What does Aragorn mean?

[ 3 syll. a-ra-gor(n), ar-ago-rn ] The baby boy name Aragorn is pronounced AARRah-GaoRN †. Aragorn's origin is Literary, and its use, English.

Variant forms share both the origin and meaning of the name Aragorn.

Aragorn is irregularly used as a baby boy name. It is not ranked within the top 1000. 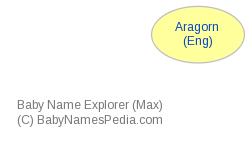