What does Ardian mean?

[ 3 syll. ar-dian, ard-i-an ] The baby boy name Ardian is pronounced as AARDiy-aeN †. Ardian is used predominantly in the Albanian language, and its origin is Latin and Albanian. Albanian origin: The first name is dervied from Ardiaea, the name of one of the biggest Illyrian inland tribes which eventually settled on the Adriatic coast; the tribal name could be ultimately of the Albanian 'ardhjen'.

In addition, Ardian is a variant of the name Arden (English).

The name Ardiana (Albanian) is the female version of Ardian.

Both the origin and meaning of Ardian is inherited by all variant forms.

Ardi (Albanian short form) is a variant of Ardian.

Ardian is an infrequently used baby name for boys. It is not listed in the top 1000 names. 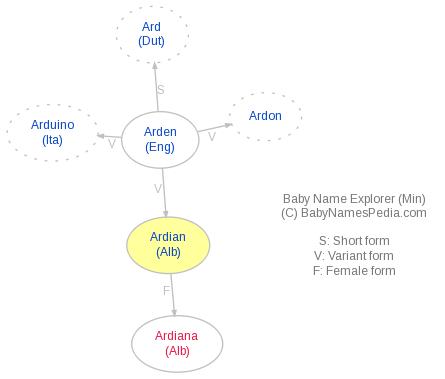