What does Aretha mean?

[ 3 syll. a-ret-ha, ar-e-tha ] The baby girl name Aretha is pronounced as ahRIY-THah- †. Aretha is mainly used in English and it is of Old Greek origin. The name is derived from the Greek Arete, itself from the element 'arete' (meaning excellence, virtue). In Greek mythology, Arethusa was a wood nymph who was pursued by an amorous river god and later transformed into a spring; this form of the name was later revived in various 17th-century English works, such as the Beaumont and Fletcher play Philaster (1608-). The name Aretha has in recent times been popularized by the American singer Aretha Franklin (1942-).

The name Aretha is used to a great extent; it has 29 variant forms that are used in English and other languages. English variant forms include Areata, Areatha, Areathia, Areeta, Areetha, Aret, Arete, Arethea, Arethia, Aretina, Aretta, Arita, Aritha, Arletha, Arytha, Arythya, Laretha, Oreta, Oretha, Oretta, Orette, Rareta, Reatha, Rethy, and Ritha. Other English forms include the shortening Retha, and the spelling variant Areta. Variant forms of Aretha used in other languages include the Latinized Arethusa and the French Arette.

Aretha is rare as a baby name for girls. At the modest peak of its usage in 1968, 0.032% of baby girls were named Aretha. Its ranking then was #399. The baby name has since dropped out of favor, and is today of irregular use. Out of all girl names in its group, Aretha was nevertheless the most widely used in 2018. 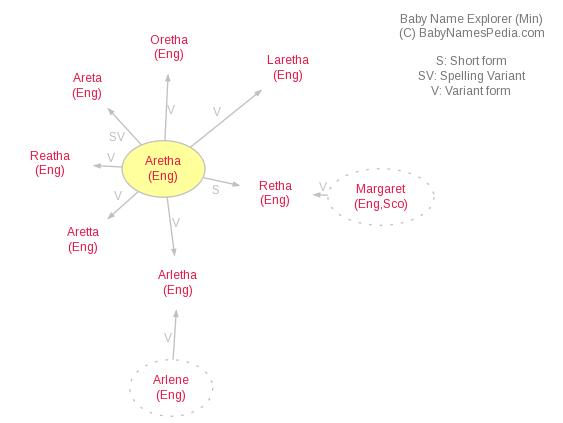