What does Ariadne mean?

[ 4 syll. a-ria-dne, ar-iad-ne ] The baby girl name Ariadne is pronounced as aeR-iy-AED-Niy (English) or aa-Riy-AAD-Neh (Old Greek) †. Ariadne is mainly used in English, German, and Greek, and its language of origin is Old Greek. Ariadne is of the meaning very holy woman. It is derived from the elements 'ari' which means most, very ; 'hagnos' pure, chaste. Ariadne was the daughter of the Cretan king Minos in Greek mythology. According to legend, she gave the Athenian hero Theseus a ball of thread to help him escape the Labyrinth after killing the Minotaur. She later married the god Dionysius, who after her death cast the crown he had given her into the sky, where it became a constellation. Saint Ariadne was a 2nd-century Phrygian martyr who popularized the name among the early Christians. In recent times, forms of the name have been made known through the Ariane family of European rockets operated by the French company Arianespace.

Ariadne is somewhat popular as a baby name for girls, and it is also perceived to be rather trendy. The name has been rising in popularity since the 2010s; prior to that, it was of irregular use only. At the modest peak of its usage in 2016, 0.020% of baby girls were named Ariadne. Its ranking then was #730. In 2018, its usage was 0.015% and its ranking #928. Out of the group of girl names directly related to Ariadne, Ariana was the most commonly used. In 2018, its use outnumbered Ariadne's by 13 times. 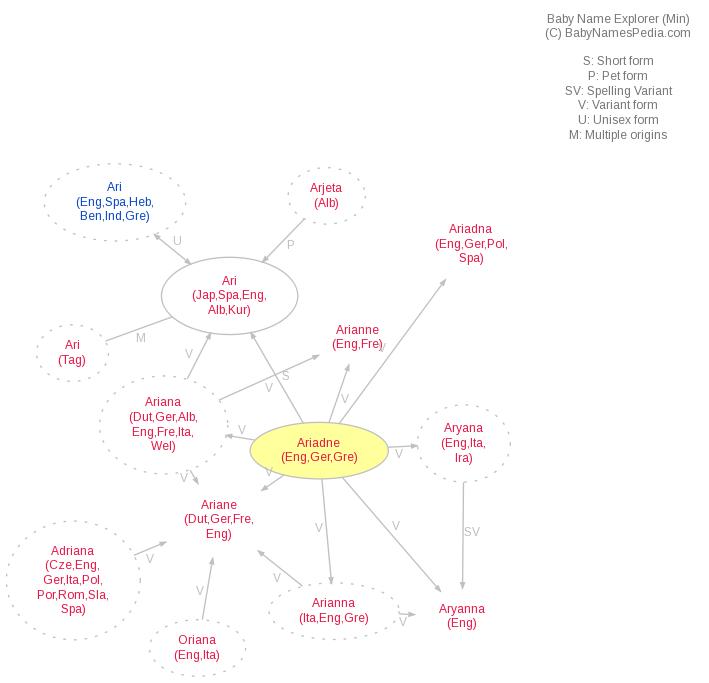