What does Arlette mean?

[ 2 syll. ar-let-te, arl-e-tte ] The baby girl name Arlette is pronounced as aaRLEHT †. Arlette is mainly used in the English, French, and German languages. It is of English and Germanic origin. Germanic origin: The name is of obscure origin, probably a diminutive of Charlotte or other Germanic names with the element 'arn'. In the 11th century, the name was borne by the mother of William the Conqueror.

In addition, Arlette is a variant form of the English name Arlene.

Arlette is also a variant form of the French, German, Dutch, English, and Scandinavian name Charlotte in the English, French, and German languages.

Variant forms share the origin and meaning of the name Arlette.

Another variant form of Arlette is the French diminutive Arletty.

Arlette is a somewhat popular baby girl name. The name has been rising in popularity since the 2010s; prior to that, it was of irregular use only. At the modest peak of its usage in 2018, 0.016% of baby girls were given the name Arlette. It had a ranking of #892 then. In 2018, out of the family of girl names directly linked to Arlette, Charlotte was the most widely used. It was 56 times more popular than Arlette in that year. 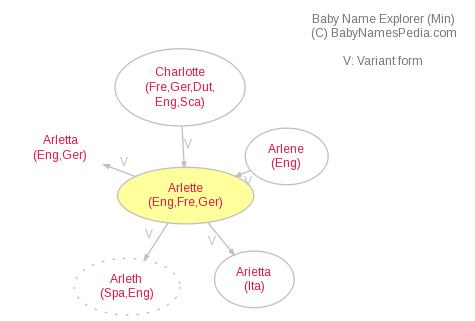