What does Arley mean?

[ 2 syll. ar-ley, arl-ey ] The baby boy name Arley is pronounced AARLiy- †. Arley's language of origin is Old English and it is predominantly used in English. The meaning of Arley is 'the bowman, the hunter'.

In addition, Arley is a contracted form of the English Harley.

Forms of Arley include the names Arlea, Arleah, Arlee, Arleigh, Arli, and Arly.

Another form of the name is the English spelling variant Arlie.

Arley is a rare baby boy name. At the modest peak of its usage in 1908, 0.007% of baby boys were named Arley. It was #781 in rank then. The baby name has slipped in popularity since then, and is used only on an infrequent scale now. In 2018, out of the family of boy names directly related to Arley, Harley was the most popular. 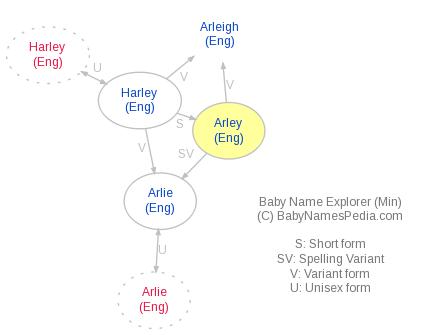