What does Arnold mean?

[ 2 syll. ar-nol(d), arn-o-ld ] The baby boy name Arnold is pronounced as AAR-NahLD (English) or AAR-NaoLT (German) †. Arnold is used predominantly in the Dutch, English, and German languages, and its origin is Germanic. The name's meaning is eagle ruler. A two-element name, it is derived from the elements 'arn' meaning eagle ; 'wald' to rule. Arinwalt (Germanic) and Earnweald (Old English) are old forms of Arnold. The name was borne by Saint Arnold, an 8th-century Greek musician at the court of Charlemagne. It is not certain how Saint Arnold had a Germanic name despite his Greek roots. The name was also borne by Arnold of Soissons, an 11th-century French bishop and patron saint of Belgian brewers, and a 12th-century Augustinian monk who was hanged for rebelling against the church. The name was introduced to England by the Normans in the 11th century, replacing the Old English form. The modern form of the name evolved via forms such as Arnaud, Aunaut, Ernald, and Ernaldus. The name died out by the end of the Middle Ages, before being revived in the 19th century. The name Arnalda (Italian) is the female version of Arnold.

Arnold is rare as a baby name for boys. At the peak of its usage in 1916, 0.201% of baby boys were given the name Arnold. It ranked at #89 then. The baby name has since substantially fallen in popularity, and is currently of very modest use. Out of all boy names in its group, Arnold was nonetheless the most popular in 2018. 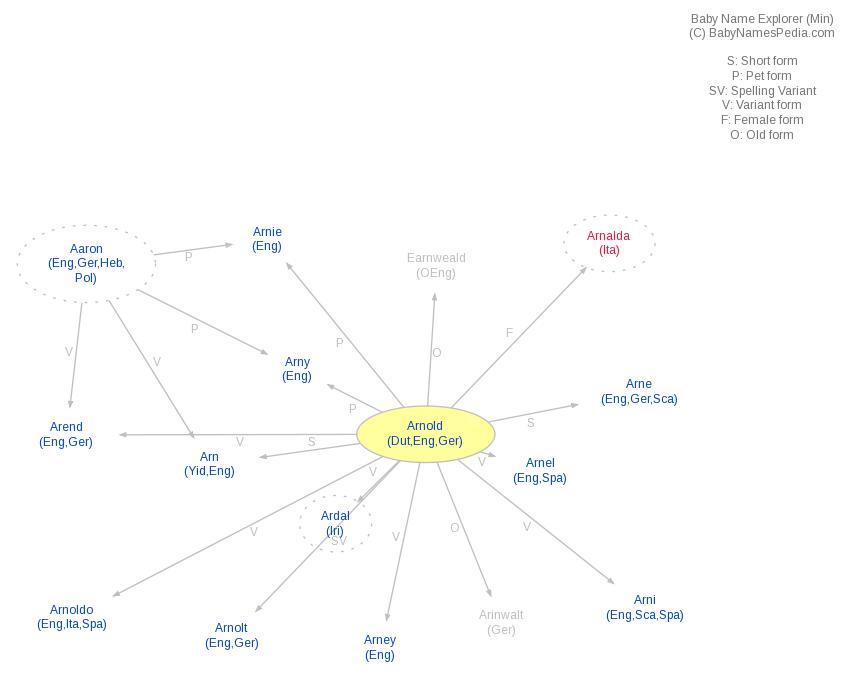