What does Arran mean?

[ 2 syll. ar-ran, arr-an ] The baby boy name Arran is pronounced as AA-RaeN †. Arran is used predominantly in English and Scottish, and it is derived from Hebrew and Scottish origins. From Scottish roots, its meaning is peaked island, arched ridge. It is derived literally from the word 'arran' with the meaning peaked island. Arran is the name of the most southerly and beautiful Scottish island. The island name could have the meaning 'peaked island' in Gaelic, or else it could be associated with the Irish Aran Isles, of the meaning 'arched ridge'. There is a current trend of using Scottish place names for given names in Scotland.

In addition, Arran is a spelling variant (English) of the name Aaron (English, German, Hebrew, and Polish).

Arran is seldom used as a baby name for boys. It is not listed within the top 1000 names. Out of the group of boy names directly related to Arran, Aaron was the most commonly used in 2018. 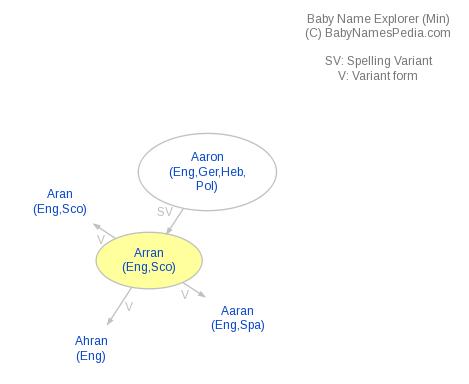