What does Arsenio mean?

[ 3 syll. ar-se-nio, ars-en-io ] The baby boy name Arsenio is pronounced as aaR-SEH-NYow (Italian, Spanish) †. Arsenio is largely used in the Italian, Portuguese, and Spanish languages, and its origin is Old Greek. It is derived from the element 'arsenios' meaning virile. Arsenios (Old Greek) and Arsenius (Latin) are old forms of Arsenio. The name was borne by the 5th-century Saint Arsenius the Deacon, a Roman imperial tutor. The name Arsenia (Italian and Spanish) is the female equivalent of Arsenio.

Arsenio has 19 variants that are used in English and other languages. Variants used in English include Arcinio, Arseenio, Arseinio, Arsen, Arsene, Arsenios, Arsenius, Arseno, Arseny, Arsenyo, Arsinio, Arsino, and Senio.

Arsenio is rare as a baby name for boys. At the peak of its usage in 1989, 0.019% of baby boys were given the name Arsenio. It ranked at #478 then. The baby name has since markedly fallen in popularity, and is now of very modest use. Out of all boy names in its group, Arsenio was nonetheless the most popular in 2018. 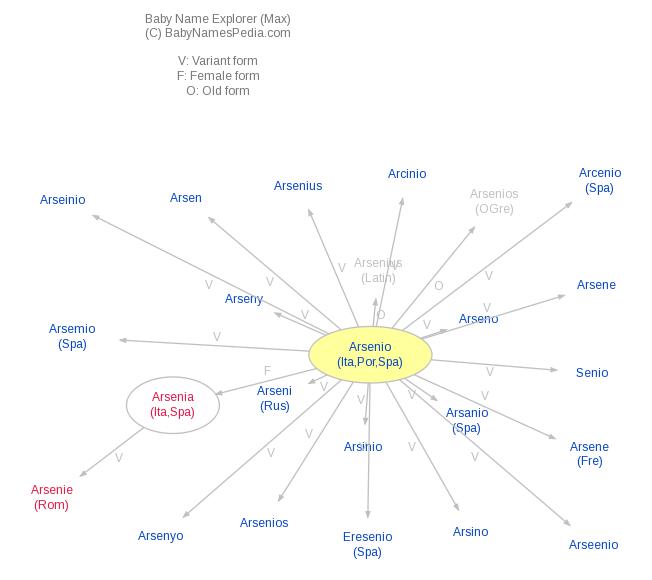